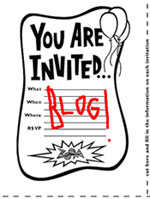 Some time ago friend and photographer, Bill Sullivan and I were brainstorming about the blog and what it could and could not do. It occurred to us that far too often many were trying to impose older (non internet) forms upon the photography blogs rather than focus on what they are indeed good at. It also became clear that the blog was a wonderful way to get insight into ones artistic character. With this in mind we approached a few museums with the idea of creating a blog residency. Where for one month an artist who normally doesn't do much blogging would be invited to post. None took us up but we held the idea until Taj asked me to contribute to the Daylight blog. We thought not only could it provide accessibility to an artist who normally doesn't have that sort of broadcast., but it could be a further understanding of concepts, influences and working process.

So here's the guidelines/rules on Invites.

• Readers can post questions to artists in the each monthly intro of the artist. It is up to the Invitee as to whether or not they respond to all or any of those questions. There are a few reasons for this, one being that we don't want the content of the Invitee posts to be only dictated by the readers. Another is most are simply so busy (which is why they don't have blogs themselves).

That's as complicated as it gets now on to our first Invite!