Juan Manuel and his trip to the sun 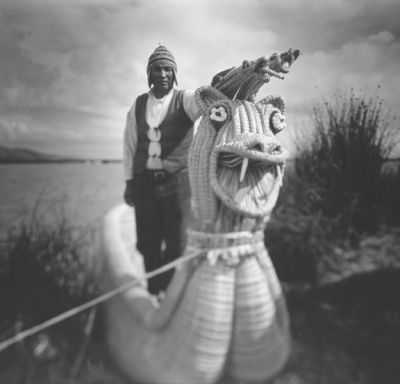 Perú, Viaje al sol is a revealing exhibition by Spanish photographer Juan Manuel Castro Prieto that has been traveling through Latin American since October 2008. The project started in one of the most captivating cultural contexts of the world: the sacred valley of the Incas. From his first contact with the Peruvians, Castro Prieto has developed an extensive body of work that has taken him through nearly all of Peru's regions -the 'jungle eyebrow', the highlands, the coast, the Amazon Jungle- as well as through many of his personal and professional interests.

Castro Prieto began taking pictures of Peru in 1990 when he traveled to Cuzco to print the work of the early 20th century Peruvian photographer Martin Chambi. Chambi was a perfect paradigm for Castro Prieto and the resulting prints are widely regarded as the finest ever made. He packed up his recently opened black and white print studio in Madrid and disembarked to Lima to what was to be an experience that changed not only the way the work of Martin Chambi is read throughout the world but also the way Castro Prieto understands photography and Latin America. Since then, he has made 11 return trips that have marked his photographic practice, guided his personal growth and strengthened his interest for all things Peruvian: from its people to its literature. The photographer has become, indeed, a connoisseur of Peru through its faces and its landscape.

The exhibition Perú, Viaje al sol is made up of some 130 impeccable black and white prints first shown Madrid's Centro Cultural de la Villa in 2001. Since then, it has been waiting for the opportunity to be shown in its original context. As part of a large program of exhibitions and conferences, Juan Manuel, along with his multiple Peruvian friends and memories, is now touring Latin America.

The exhibition can be read, as its title suggests, like a journey. Not only the journey of Castro Prieto to Peru, but that of the viewer towards the fascinating land of the Incas and beyond, that of the photographer towards the legacy of Martin Chambi, and also and perhaps most importantly, that of Juan Manuel to the depth of his self. He describes the various series of images as having sprung from a possibly naïve approach to the new, the exotic, which then turned into a questioning of his own values and the ideas that the West has of all things foreign. With the same honesty that the artist read in Chambi's work, he now faces his own production to find a different Peru than the one he dreamt of when he was a child. This is, in a way, is the visual story of a dream come true.

The images, with a documentary and anthropological shade are, needless to say, stunning. Large formats combine with smaller prints to convey a diaristic impression where images and places take up space in our notebooks and memory. The exhibiton is exactly that: the journal of a trip into the inner self of a land, a man, and a civilization.

'Perú, Viaje al sol [Peru, A Journey to the Sun]' will continue through Latin America in 2009.