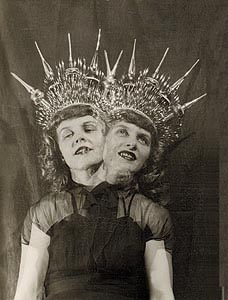 Sadly, these proclamations reached only a very select audience: his wife (and muse), Marie, and a small circle of friends and relatives. As far as the outside world was concerned, Von Bruenchenhein's plaque simply read:

Though undiscovered by the public until after his death, for forty years Von Bruenchenhein spent his time off from his bakery job immersed in the lives his plaque described: he painted apocalyptic landscapes and phantasmagorical beasts, sometimes using delicate brushes fashioned from Marie's hair; he created miniature thrones and spindly towers using TV dinner chicken bones and model airplane glue; he molded botanically inspired ceramics out of the clay from his backyard, and fired them in his oven; he wrote poems and kept journals of his philosophical musings. He also lovingly and obsessively photographed his wife, to whom he dedicated all of his work, leaving us with a touching document of their playful, imaginative private world.

Von Bruenchenhein's portraits of Marie have the same erotic charge and bracing intimacy as the more well-known photographic paeans of the past, from Charles Dodgson's tender (and, admittedly, slightly creepy) portraits of his child-muse Alice Liddell, for whom he wrote his Alice in Wonderland books, to Alfred Stieglitz's studies of Georgia O'Keeffe. But whereas Dodgson and Liddell played dress up, and Stieglitz and O'Keeffe worked to exude an austere, regal beauty, the Von Bruenchenheins summoned up a glittering fantasy world that was cobbled together out of supplies from their local five-and-dime. Here Marie became pinup and ingénue, jungle queen and dream Goddess; she inhabited a world of glamour and excitement alien to her surroundings, made manifest by the camera's lens.

Considered historically, the portraits can be seen to inhabit a space that gingerly straddles the line between modernist experimentation and cheesecake pin-up camp. Some of the photographs, such as the striking double exposure of Marie wearing a crown of Von Bruenchenhein's design, recall the surrealist photography of Man Ray, while others, with their raucous, clashing textiles, bring to mind the work of the eminent self-taught Malian portrait photographer Seydou Keïta and the post-impressionist painter Édouard Vuillard. Sometimes, however, there are gestures towards a more lowbrow pedigree: when the eroticism is amped up and Marie's costumes take a more fetishistic turn, it is hard not to think of the recently deceased pioneer of pin-up kink, Bettie Page.

Of course, as Von Bruenchenhein was creating his work in virtual isolation, coloring it with a litany of precedents seems beside the point. What is most important to recognize, particularly as the art world begins to slog through the aftermath of its most recent gilded age, is Von Bruenchenhein's unabashed passion, not just for his wife, but for the creation of a life that was rich with interest, wonder, and invention--no matter who was watching.