Jehsong Baak, a Voyager in Exile 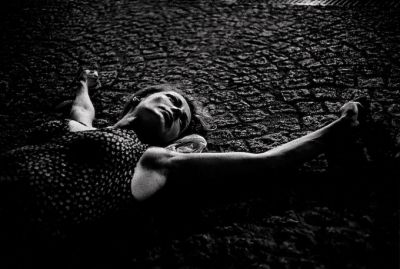 The Jehsong Baak: Là ou Ailleurs ("Here or Elsewhere") exhibition at the Rick Wester Fine Art gallery features twenty four gelatin silver prints, all of which were printed by Baak in a Paris darkroom. This is a must see exhibit since the opportunity to view moving and dramatic gelatin silver prints in galleries and museums is a fading rarity throughout the world. Baak utilizes two sizes (16"x20" and 20"x24") which allow the many details in his works to surface.

Jehsong Baak (b.1967) freely acknowledges that Robert Frank (b.1924) and Joself Koudelka (b.1938) have served as inspirational mentors in his work. The parallels in the lives of these three photographers are striking and so too basic themes of their work. Yet Baak maintains his own visual language and context that is complex and poignant, creating a personal path so that his photographs serve as confessions of and insights into his persona and life.

The continuity of Baak's photographs and his aesthetic impact are best described as Caravaggesque chiaroscuro. The eerie and surreal image prints are of high contrast and a grainy black and white, a result of photographing at night in stark and desolate places. The subjects in these photographs are friends, intimates, and subjects encountered in daily life. Whether the figure is a man or woman, boy or girl, Baak's photographs evoke the feeling of a self-portrait, irrespective of the difference in subject, time or locale.

Baak's photographs break the stereotype and generalization that photography is a reflection of reality. Baak's photographs reflect his past and present, memories and emotions as if he is on an endless voyage and his photography is a way to trace his path. While many contemporary photographers are engrossed with or attempt to capture too many thoughts and ideas instead of seeing and feeling what subjects are actually at their disposal, it is refreshing to marvel at Baak's ability to be intuitive and spontaneous.

The exhibition begins with an abstract image called Wet Triangle in Phone Booth, Paris, 2000. Without knowledge of the title from the image lists, it is hard to figure out anything about the photograph. Geometrical and reflective focused and unfocused forms and shapes are layered into the space. A triangle panel supports wet debris with an array of gray tonalities submerging into the darkness. Where are we and what exactly are we looking at? Baak takes these tangible forms of reality and transforms them into abstract forms and shapes in his photographs. Once embraced and embodied in the photograph, they no longer are part of a reality. We have entered and been enticed into Baak's surreal world.

Sadness and mystery are two words that came to mind after seeing Baak's photographs. Here sadness is what Philip Perkis refers to in his book as "The Sadness of Men," "one that embraces life and suggests a possibility of transcendence" that is positive resonance.

Whether Baak is in Paris, Rome, or New York, he translates the outer world into his inner world, thus creating photographs of his own. His photographs are fragments of his past like an incomplete puzzle. At the end, nobody knows how to put all the pieces together except Baak himself. Like Diane Aubus said, "A photograph is a secret about a secret. The more it tells you, the less you know."

Born in Junju, South Korea, Baak immigrated to the US at the age of nine in 1977. Growing up in a Korean household where traditional Confucianism values permeated, it is no surprise that Baak, himself, evinced modesty and restraint. In his junior year in high school, Baak bought his first camera and quickly became obsessed with photography. For Baak, photography enabled him to escape to some place more magical. When taking pictures, Baak tries not to apply any theories or strategies and to let go of his conscious mind.

One of the single most important events that made Baak the photographer he is today was separation from his mother at the age of four. He finally met her again 26 years later in Korea in 1997. The absence of maternal love and support while growing up created a longing for and almost mythical curiosity in things maternal as is evident in Baak's photographs. Women are almost faceless and unapproachable in Baak's photographs by blurring, out-of-focus, reflection, etc.

In Woman Pressed against Glass, Paris, 2003, a woman is on the other side of glass, thus making her untouchable. In Reflection of a Woman, Paris, 1999, a woman's face appears in a building reflection as if it is a face mask. Vertical and diagonal lines go through her face. She is there somewhere but we cannot decipher clearly. In Woman Lying on Pavement, Paris, 2003, the pattern of a woman's dress tinges the pavement making it seem that her body is being submerged into the pavement. Her arms are raised and her eyes look away, as the street lights illuminate part of her face and arms. She looks lost in space and time.

At the University of Michigan, he met his life long mentor and friend, Jon Rush. Rush was Baak's drawing teacher. Baak's respect and gratitude towards Rush continues to this day and he dedicated his book "Là ou Ailleurs" to Rush. Baak says, "During my 20s, when I was completely lost and confused, often discouraged and tormented, Jon was the one person who stood faithfully by my side and kept encouraging me to continue." Baak regards Rush as a teacher of life rather than an academician.

From age 22 to 29, Baak stopped taking pictures. Baak refers to this period in his life as "hibernation," Baak reminded himself of Jon Rush's story about oysters bearing pearls. Baak told the story in an interview with Shots Magazine (Shots 99, spring 2008): "He said that oysters need salt in order to survive, but that it's painful when salt comes in contact with their flesh. The suffering oyster produces a fluid to cope with the pain and the fluid and salt mixed together produces a pearl. He told me to go out there and make my own pearls."

During this time, Baak also watched Federico Fellini (1920-1993)'s 8 ½ (1963) many times. He regards 8 ½ as an inspiration in his photography. The influence of films on Baak's photography is striking. Any one of Baak's photograph can be seen as a movie frame. Drama and fantasy, stark and dreamy backgrounds, dramatic lighting, isolated subjects lit in darkness, desolate cityscapes, and character in their own state of mind can all be attributed to this.

Baak made a dramatic decision in 1998, moving to Paris from the US to pursue life as a photographer. He became a foreigner again. Since then, he has been an oyster bearing pearls, painfully cultivating himself as a photographer. He often wandered around Paris at night and photographed different layers of the city. Film noir-like low-key lighting is Baak's favourite. When Baak faces harsh day light, instead of avoiding glares, he points his camera right at the sun. Baak says, "I like difficult situations, for I have this belief that miracles are more likely to happen in difficult rather than easy situations."

Talking about his influences, Baak says, "Robert Frank and Josef Koudelka's works had the greatest influence in my evolution as a photographer. Frank's uncompromising, naked, often brutal, exploration of his interior life, and Koudelka's formalistic poetry and elegance in his expressions of rootlessness were important references for my own development."

Baak's exile to foreign land is similar to that of Frank and Koudelka's. Swiss-born Robert Frank immigrated into the U.S.A. in 1947 then lived in New York and Nova Scotia, Canada. Czech-born Josef Koudelka left his country in exile in 1970 and lived in England and then became a citizen of France in 1987. He finally was able to visit Czechoslovakia in 1990 after 20 years, just like Baak visited Korea 20 years later since he left.

Coincidently, the person who recognized the pearls in Baak's photographs was Robert Delpire, the very person who edited and published Robert Frank's "The Americans" (1958) and Josef Koudelka's "Gypsies" (1975). These two books had a profound impact on Baak. After failing to catch the fancy or understanding of three other publishers, Baak showed his dummy book to Delpire. Baak's "Là ou Ailleurs" (2006) was published with Delpire's editing and design. Baak recalls this event as the most important event in his photographic career so far. The photographs exhibited at Rick Wester Fine Art were selected by Delpire and finalized by Wester.

The title "Là ou Ailleurs" ("Here or Elsewhere") was devised by Delpire after finishing with the layouts. Delpire described Baak's photographs as "not bound to a specific location but rather to an emotion" and said "his pictures come from a place he calls his own." The figures in Baak's photographs are elsewhere through reflections and transparencies. They are here and elsewhere simultaneously.

While Delpire and Baak were preparing for an exhibition at Philips de Pury in Paris, coinciding with the launching of the book, Rick Wester had a chance to see Baak's photographs. Wester is a veteran in the photography industry with 30+ years of experience from galleries to auction houses. Wester became a private dealer and also engages in appraisals and private consulting. In 2007, Wester launched Rick Wester Fine Art (RWFA). Jehsong Baak: Là ou Ailleurs is the second photography project shown at RWFA and it is Baak's first solo exhibition in the U.S.A. RWFA changes venues for each exhibition. Associate Director Sarah Stout interprets this kind of nomadic strategy as a flexible business model that gives freedom to explore different locations and not to be tied-down to one location.

The exhibition at RWFA ends with Dog on the Beach, Holland, 2005. The image is strange and beautiful. A dog is looking back at the sea where there are cumuli in the sky as white as the dog's hair. More than half of the frame is covered by a V-shaped dark vignette that surrounds the dog to create the illusion for the viewer of looking though a key hole. The dog's legs are facing forward as if at any second, it will turn back and walk forward. This is a perfect photograph to end the exhibition. It evokes hope and despair that are like two sides of a coin. The ambiguity of the image creates mystery for the viewer and only Baak knows the secret revelations and cathartic release of emotions in this all his other photographs.