Exhibition Review -- Paul Graham's a shimmer of possibility at MoMA 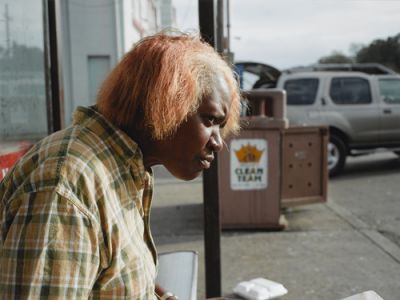 Paul Graham's past work has often existed in liminal spaces-between the documentary and the subjective, the picturesque and the political, the moment and the metonym. His recent series, a shimmer of possibility, which is on view at the Museum of Modern Art until May 18, takes a similar tack, this time attempting to chisel out a space between photography and cinema. This, of course, is an interstice that has been contentious since the Lumière brothers first spooled celluloid past a shutter, but it has been particularly well trodden-at least on the photographic side of the aisle-over the past quarter-century, spurred on by the single-frame cinema of artists like Jeff Wall, Gregory Crewdson, and Philip Lorca-diCorcia. Graham's work differs most notably from that of these precursors in that none of his images are staged, but a shimmer of possibility is still attempting the same basic alchemy: the transformation of the static image, the slice of time, into a flowing temporal stream.

Graham goes about this task in a somewhat literal way: rather than confining his narrative to the space of a single frame, he presents us with multiple views of same incidental scenes, gathered from his travels across America--like a flipbook, or, as Graham would have it, a "filmic Haiku."  We are shown a man mowing his lawn during a passing sunshower, children playing basketball in the street at sunset, a sweet-eyed man selling roses at night. Each scene is broken up into perhaps five to ten parts, which are exhibited as variously sized prints staggered along the wall. The pictures push and pull between micro and macro views, showing the passage of tiny increments of time, which are not quite as compressed as those of Eadweard Muybridge-their most obvious historical analog-but are still short enough to give the sense that what is being documented is merely a fleeting moment, one like many others, but one which Graham strives to imbue with heightened, or perhaps even mystical, significance.

This lofty intent is, of course, in evidence in the rather well chosen title under which the work is organized, but it is equally in present in the rhetoric and reference that Graham employs to bolster it. Here, for example, is Graham's poetic and somewhat Heraclitian take on his project: "Perhaps instead of standing at the river's edge scooping out water, it's better to be in the current itself, to watch how the river comes up to you, flows smoothly around your presence, and reforms on the other side like you were never there." Additionally, Graham claims the short stories of Chekhov as an inspiration, saying that "...there's something magical about how perfectly described they are, the transparency of what's happening, without guff or show, simply described, with nothing proscribed." All of this is not foreign to Graham's practice. He is uncommonly eloquent in his discussions of his work, and has used literary touchstones as jumping-off points in the past-most recently, he used Melville's famous rumination on the whiteness of the titular whale in Moby Dick as an epigraphic text for his book American Night. However, whenever one employs this kind of flowery rhetoric and vaunted literary precedent, there is always an extreme danger that the work in question will fall short of the mark. Interestingly, this both is and is not the case with a shimmer of possibility.


Like much project-based photographic work, a shimmer of possibility exists in two forms: as exhibition prints and as a publication. In this case, a shimmer of possibility exists in publication form as a supremely handsome set of small books, most of which contain one or more of the series of photographs, sometimes interwoven with one another, though one book contains only a single photograph. These books, which were published by Steidl and are on view in a vitrine in the corner of the exhibition, sold out almost immediately upon their publication-and with good reason. Unfortunately for the visitors to MoMA (and perhaps for Graham himself) the work comes off extremely well in book form, but not so much as exhibition prints.

Essentially, this is a form-content issue. When seen together on a wall, we take in Graham's scenes all at once, mentally synthesizing the multiple views to create a coherent sense of the whole "moment" that is being represented. However, in the book format these moments are spread across the books' pages, which allow them to unfold in a manner more befitting the project's intended effect. In the books Graham's scenes flow, while on the wall, they feel self-contained, static, fixed. The books also have the added benefit of allowing the exhibition's discreet vignettes to become intertwined, creating an engaging contrapuntal narrative play that suggests a nonlinear understanding of time's unfurling.

Formal considerations aside, there is also the issue of Graham's somewhat problematic choice of vignettes whose success is often predicated on rendering the lives of impoverished or marginalized Americans into something approaching the picturesque. It is here that Graham's poetic intent becomes a kind of trap, in which his transformation of the lives of the less fortunate into allegory strips his subjects of both agency and substance.  No longer simply themselves, Graham's subjects begin to exist only in the service of his overall conceit, which is, he tells us, to allow us to "Just slow down and look at this ordinary moment of life. See how beautiful it is, see how life flows around us, how everything shimmers with possibility." This is not to say that his pictures are not beautiful--many are--but simply that the thrust of the project has a kind of flattening effect on the lives of his subjects, which, it should be noted, can also have unintended self-ironizing consequences. When, for example, one looks at Graham's images of a dire looking woman eating a fried chicken meal from a Styrofoam container at a bus stop in pre-Katrina New Orleans, it is not just the knowledge of impending catastrophe that causes us pause, but the feeling that even before the hurricane, the shimmer of possibility in her life was not the effervescent sparkle evoked by the project's title, but the waning light of past hopes disappearing over the horizon.