The State of Ata the contested imagery of power in Turkey: Mike Mandel Chantal Zakari 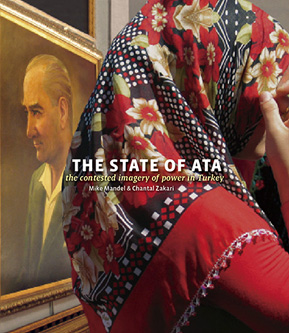 In The State of Ata artists Mike Mandel and Chantal Zakari examine the contemporary imagery of Mustafa Kemal Atatürk, Turkey’s revolutionary leader after World War I. From 1923 until his death in 1938, by the sheer force of his personality and his command of the military, he fashioned Turkish culture through the prism of his vision for a secular state. He created a new sense of nationalism, exiled the Sultan and diminished the power of religion by abolishing the Sunni Muslim Caliphate. The wearing of religious clothing was banned in public. In an effort to identify Turkey as a modern and Western state, Mustafa Kemal dropped the Arabic alphabet in favor of Latin characters, expanded secular public education, and new rights for women. He required that everyone adopt a last name and his became “Atatürk,” ancestor of all Turks.

Between 1997 and 2009, Mandel and Zakari, one American, the other Turkish, have employed the imagery of Atatürk to create a portrait of all sides of the body politic: the symbol of the secular revolutionary hero, the power of the state that resides with the military, and in opposition, the demands for renewed religious political expression symbolized by the Islamist scarf. The State of Ata weaves together the artists’ photographs of Turkish society, the public imagery and sculptural presence of Atatürk, documentation of their own interventions and performances, interviews, and a collection of archival and popular imagery. The book is conceived as a collection of books within books: a photo book, a schoolbook, a diary, and a fantasy album of military portraits.