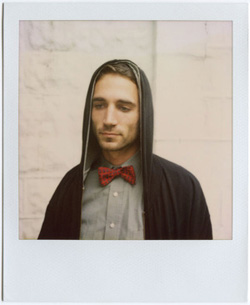 "In 2002 I was twenty-three years old. David Lamb and I were leaving the blood bank in Seattle where we went twice a week to make 45 dollars selling our blood...I sold my blood to buy expired Polaroid film where I could find it, and when that didn't work I would steal it... We had no jobs, we had no plan...I told David that this was to be the plan: No plan. I said we'd 'Shoot The Moon.' Like in the game of Hearts, you collect all the bad cards you win, you get almost all of them but not all, you lose. So I started collecting my cards in the frame of a Polaroid." - Mikael Kennedy

Shoot the Moon consists of 500 Polaroids taken between 1999 and 2009. As he moved about - living and traveling in New England, driving from Massachusetts to Washington, hanging around Portland, Oregon, even flying off to Serbia, and then coming to New York - Kennedy photographed with an obsessive intensity. This exhibition represents a selection from the thousands of pictures he took during his wanderings. His passion for photographing his friends and family, the places he encountered, is matched and enabled by his love affair with the Polaroid process itself.

Visual Studies Workshop will exhibit digital artworks by Christopher Baker that use our online identities and social networks as materials in the work. Baker will exhibit three pieces, “Hello World!: Or How I Learned to Stop Listening and Love the Noise,” an immersive multi-channel video installation made from around 5,000 video diaries found online by the artist; “Murmur Study,” an installation featuring a computer program to scan for Tweets and Facebook status updates in real time that print out and pile up in the exhibit;  and “My Map,” a self-portrait of Baker’s social network made with custom software from his 60,000 plus archived e-mails. 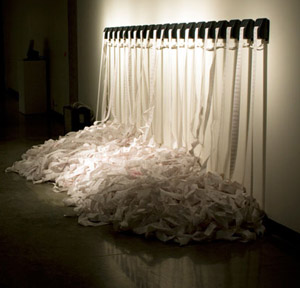