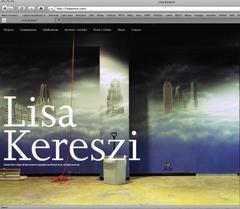 I was checking my web traffic with data finder/organizer Google Analytics, and saw that my website, somehow, was getting incorrect data driven to it by a fellow photographer’s site, someone I know. I thought maybe he had done me a favor and linked to my site, www.lisakereszi.com, on his page, as some other colleagues have done. What I saw when I went to his site was like a slap in the face.

It was a mirror image of my own site, with the fonts changed and his own photographs plugged in. I contacted the designer I worked with, Pamela Hovland, and also the site’s builder, James Muspratt, who pointed out that the html was copied, and that the new site's "designer" (initials S.S.) had gone so far as to insert her name into our html in the copyright section, effectively saying that the html was owned by her. Their site went up 7 months after mine, and was not discovered by me until almost 3/4 of a year later. Wow.

I did some research online, as I figured this must happen frequently, but not usually so close to home. I had actually heard of this sort of thing - when I was planning my own site in 2008, someone suggested to me that I could just rip off someone else's html. I had a very specific concept in mind regarding the background and the toolbar and the content, besides the fact that I wouldn't do such a thing. I don't think Picasso's quote, "Good artists borrow, great artists steal," is really relevant here. Good artists work hard, mediocre ones don't know how to come up with their own ideas, so they copy.

In my online research I found that, of course, your site's "content" is copyright-protected, whether you register it with the US Copyright Office or not. A "Copyright 2010 ..." on each page should suffice, unless you decide to sue. If you want to go to court, you must register your site officially, either by making a pdf of the entire thing, or taking a screen shot or printing out each page and sending it in via mail or electronically. The tricky word is "content." Content means your author-created pictures, your written words, your artwork. It does not necessarily mean your site's design, layout or interface.

The following comes off of page 3 of Circular 66 from: http://www.copyright.gov/circs/ :"Describe the original authorship being registered. Use terms that clearly refer to copyrightable authorship. Examples are “text,” “compilation,” “music,” “artwork,” “photography,” “motion picture/audiovisual” (includingsounds), or “sound recording” (when the sounds do not accompany a series of images). Do not use terms that refer to elements that are not protected by copyright or may be ambiguous, for example, “website,” “interface,” “format,” “layout,” “design,” “look of website,” “lettering,” “game,” or “concept.”

Wow, again. I do not know what I would do if I had chosen to be a graphic designer. I would not have been able to sleep at night. Sure, concept and design sounds ambiguous, and maybe it can be, to a certain degree, but I find that to be sort of terrifying. All the hard work you do, and all the ideas that go into something that come out of your very core cannot be 100% legally protected. You have to rely on others adhering to the designers' sort of Hippocratic oath.

However, there is some legal precedent if the design is "original" enough, and not a common way to express or show some information. An example is described here, in the case of Lotus 1-2-3 and Paperback  Software International's Excel program:http://www.activeonline.ie/web-design-copyright-article.shtmlThat article says, "Copyright protects the appearance of screen  displays. "Hmmm, that's not really what Circ 66 said. It seems to be a gray area that would have to be decided in court, on a case-by-case basis. The article's author goes on to say: "avoid having your site look like your competitor's because that can infringe on the competitor's 'trade  dress'--the look and feel of  the company's product or its  packaging. The laws protecting trade dress, a subset of trademark law, are designed to avoid any consumer confusion that can allow one company to ride on the coattails of another."

We are both artist/photographers; does that make us competitors, and make "trade dress" apply? Our work is very different, and it's not a commercial business site where one company is trying to confuse the customer, is it? It all sounds very ugly, and I hate having been put in this position. So what do you do? You can make your site so original that it would be terribly obvious to anyone looking at a copycat site what has happened. Your designer can make it very hard to duplicate, though I am not sure exactly how to do that. You can keep abreast on what your site is linked to and where your traffic data is coming from with Google Analytics. You can keep an eye on your peers. "Keep your friends close, but your enemies closer," right? (Sun-tzu, credit where credit is due.)

You can't sue with a definite expectation to win, but you can ask the people involved to now do the right thing and take the site down, or at least change it so much that they get an honest week’s work in. If the offending parties refuse to fix it, and you feel like you have a rock-solid case, then you register your site and prepare to go to court. Take screen shots of the offending site, and get their html by going up to View – Page Source in your browser. Website design and concept seems like a big gray area, but right is right, and wrong is wrong. What made this so much worse was that the photographer is someone I know. It's close to home, and that much more disturbing. Those facts, however, ended up being a good thing, in that I was able to have a civil discussion with the photographer about it, and he agreed to take the site down and get a new one. It sounded like the “designer” duped her client. Since he was amenable, I am willing to give him the benefit of the doubt. It’s funny/ironic that the magazine that the “designer” art directs debuted with a cover that read, “100% Unique.” Their 5th issue’s cover was a bit more accurate: “Magical Metamorphosis, Tricks Illusions.” Nice.

Here is a helpful link to more info from another copied site owner, though it's not by a photographer: http://astuteo.com/blog/article/stolen_website_design  It's just one of many I found. Also, here are some very unhappy Flickr photogs who even have a stolen website thread: http://www.flickr.com/groups/stolenwebsites/ .