Coney Island and the Village: The work of Jerry L. Thompson 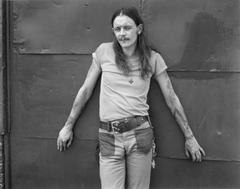 You might have only heard of Jerry L. Thompson from reading his Walker Evans at Work or the 1997 book, The Last Years of Walker Evans. That’s the book with a grizzly-bearded Evans on the cover, complete with pictures of a mangled bicycle find mounted on the wall of their apartment, and his beer tab and bottle cap collection practically mosaic-ing (a word?) the bathroom sink.I have always loved this book, and was able to meet the writer a few years ago. It turns out he was Evans’ student at Yale in the nascent years of the MFA program, his roommate in the Park Street apartment building where I frequent the dentist downstairs, and his friend in those last few years, the beginning of the Seventies. So, when I visited the Art of the Book Room collection at the Haas Arts Library with my class a few years ago, I asked if we could see Thompson’s master’s thesis, from the class of 1973, the year of my birth. While I was developing my fingers and toes, Evans was taking Polaroids up and down Chapel Street, and Thompson was hauling his 8x10 camera out to Coney Island, making pictures of a subculture of teenagers and carnival people, mostly Latino and African-American, and many of them 1970’s gang members. The pictures are amazing, and I show them off every semester now. There is a girl posed against minimalist-looking fields of shapes and tones, her star jewelry matching a star on the wall. There’s a guy with his fly down with a sort of nastily-illustrated patch that says, “Right On!” There is a black girl in a towel turban posed against a badly-drawn landscape, wearing a polyester tank and slacks. There’s a hippie-ish carnival barker almost Christ-like against a glossy painted metal wall of an amusement park. He’s wearing an Iron Cross necklace, and has a tattoo between his eyebrows. Is it a star, or is it an anarchist’s A? . The pictures have even more a sense of urgency now, with today’s Coney Island changing faster than you can catch when you turn your head away for a moment. The ones taken with flash at night also remind me a little of William Eggleston’s 5x7 series.

There is a very inexpensive book of this work available at PhotoEye Books, published by the University at Buffalo’s Center Working Papers. Unfortunately, the reproductions are not nearly up to par, and do not do justice to these large-format gems. It does come with a tipped-in inkjet print, though, possibly the photographer’s way of showing us what his work should really look like. The print alone is worth more than the price of the book, so I didn’t feel too badly when I saw the rest of the pages. The essay is also well worth a read to learn more about Coney history, and about the way Thompson thinks about photography and about the work he made 30 years prior to the 2006 publication. In it you learn that he was actually quite shy, which is not what you think from the photographs at all. He would see someone he wanted to shoot, but was paralyzed and unable to approach him or her. So, he’d just hang out right next to the group of kids that person was in, and just, well, wait. He had this crazy-looking camera contraption there, and it was just a matter of time before one of the more outgoing teens in the group would say, something like, “Hey, Mister, take my picture!.” And so he would, and could go around the circle, photographing each one of them, even though he hadn’t really been interested in the others. It would come to the One, and he could just been in total control, and un-shy, and say, and I paraphrase, “You, you’re next.” This tact has to be one of my favorite stories in Photography. There is no way an Upstate guy like him would ever, in the course of normal doings, have contact and conversation with kids wearing “Glory Stompers” bike gang colors, but the practice of photography makes such interaction possible.

From the book’s back cover:“We stood facing each other at close range for a brief moment, and then that light flashed, stunning my eyes and temporarily blinding theirs. Most times, by the time my vision cleared my subject was gone, off to seek another of the many amusements… Our separate otherwise disconnected causalities crossed, for an instant, in that place we were each drawn to, and the camera made their primping, preparation, and partying, the whole rich texture and sad history of each unique mysterious life have, for a brief moment, something in common, something shared… By chance, I was there. I saw those faces, and they became my pictures.”

I later was able to get a look at the other 8x10 work he made in the Eighties in the Village, both East and West, the streets and sidewalks of a young Madonna, perhaps. The pictures are also of young people who are very much a part of, and a product of, the specific time and place they both found themselves in. Later work continues to be an exploration of New York City, somewhat in the same vein as Mitch Epstein’s book, The City, though with a heavier insistence on the portrait, bearing a nod to August Sander. The work is very hard to find online, but a book off all his photographs are in a book that I heard is in the works by Steidl, In the Street (previously entitled, Sixty Years.) It is due out in late 2010, and I can’t wait. For the book preview page: http://www.steidlville.com/books/981-In-the-Street.html