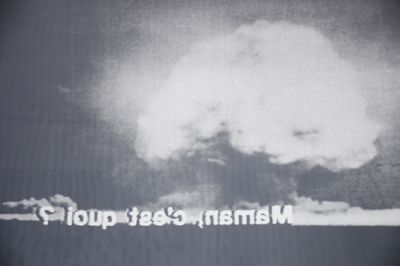 If you ever find yourself in Lyon, be sure to visit URDLA, an international center for prints and books. Located in Villeurbane - the neighboring town to Lyon (like Brooklyn to Manhattan) that makes Lyon the 2nd largest metropolitan area in France after Paris - URDLA is tucked away down an alley of a fashion wholesaler and wood shop. URDLA is housed in an old printing studio that is skylit, providing the perfect light for making and looking at art. While the space is bright white, URDLA does not feel like a regular gallery and that is because it isn't. There are consistently amazing exhibitions to see, including thematic group shows and solo shows by artists who come to URDLA over the years to produce bodies of work, but there is also a small and impressive book shop where you can purchase cards, prints and books that are produced on the premises, as well as current art magazines and monographs. There is an open working studio area (where I am currently an Artist-in-Residence, working on a series of etchings inspired by the Resistance) that houses beautiful presses of all sizes, large tables, sinks, materials and shelves for the archives: stacks of old letter stamps; drawers full of portfolios by visiting artists; a collection of exhibition posters throughout the years; lithograph stones and other treasures. URDLA has been open since the late 1970s. It is truly a remarkable space.

Director Cyrille Noirjean curates the shows and there is an impressive consistency to their political and formal power. Damien Deroubaik's aggressive, sarcastic and almost apocalyptic show and the more recent and eclectic group exhibition Violences Actives (Active Violence) both spoke to issues of war and conflict, power structures and systems of representation. The posters for Deroubaik's show - of an ape excreting money - that were scheduled to be hung around town, were never allowed to be hung, even in this relatively Socialist and anti-capitalist country. That's how hard Deroubaik punches.

Violences Actives included some translucent photographs of appropriated imagery with French subtitles by prominent French artist Jacqueline Salmon. Images lifted from the television - of an atomic explosion with the words "Mama, what is it?" and of a confrontation between protesters and police in the street with the word, "Democracy" and of Martin Luther King with the question "Do you fear for your life tonight?" hovered above  and throughout the exhibition. Suspended from the ceiling, viewers could see them properly and backwards. This strategy propelled these historical moments into our present and future, compelling us to recognize the continuing importance of such events and how they shape our current world: we are living in a relentlessly (post)traumatic moment and trauma begs for representation.

The current show is the solo exhibition, Evolution, by Berlin-based French sculptor Assan Smati, who has been making prints at URDLA since 2006. The images are mostly drawn from photographic imagery - butterflies with skeletons for bodies, dogs pooping and roving in packs, upside naked men with boxing gloves on. Reading these simple descriptions of the imagery, it seems that the show must also be apocaplyptic (and I do joke with the Director that a human skull should be the icon for URDLA) but somehow it transcends such a gloomy and doomed state and is quite beautiful. Circular hives and webs surround chimeras, birds with butterfly wings, elephants wearing moth-wing capes, dogs howling into a blank white void, anorexic clowns floating like insects. Noirjean cleverly installed a selection of Smati's sketches in one corner of the show: drawings of soldiers, dogs, fragmented bodies, pigs and grenades. While sketches, these could be snapshots or pictures clipped from newspapers.

Ten years ago I reviewed a show at URDLA (for Art Papers) that explored the historical and contemporary links between printmaking and photography. The show included work by many artists, including Annette Messager and Christian Boltanski, two artists who blur the lines of distinction between taxidermy, photography and clothing in their work. Both artists also employ whatever means are necessary for their concept. URDLA, while a self-declared space for prints and book, is also a space for sculpture, drawing, painting, photography, sound installations, performances and readings. This is what makes it great. This is also what makes it, at least for me, one of the only "printmaking spaces" that is more than that. It is a space for art, for process, for critical discourse, for a respite from the technologically hyped up speed of our daily world, and a welcome change from the superficial and market-driven displays at most galleries.