My Mother Road: Route One with Brad Richman 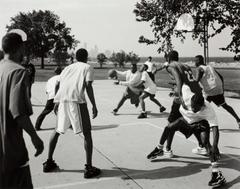 Route 66 is often referred to as “The Mother Road,” but to us East Coasters it is Route 1. Sure, these decades, it’s the parallel I-95 we use to get anywhere fast, but One preceded it. It has been there since 1926 (or 1939, depending on how far south you live), and runs often at 35 to 45 mph, and under pseudonyms like Baltimore Pike, City Line Road, Boston Post Road, East and West Main Street. It stretches for 2376 miles, from Fort Kent, Maine to Key West, Florida.

Up in Maine, lives D.C.-area native, Brad Richman. I, myself, have never lived, nor had close relatives live, very far at all from Route 1, except a couple forays up into the Hudson Valley. For four years in the Nineties I attended Bard College. This is where I met Brad, a photography major who was two years ahead of me in Stephen Shore’s program. I got to know him better when I made his portrait for my senior thesis, and I remember it like it was yesterday.

We stayed in touch after graduation, and I would see Brad and his fine black-and-white prints of basketball players at Lee Marks’ booth at Aipad. The work was an extension of his senior project at Bard – pictures of amateur basketball players and games shot with a  Wista 4x5 field camera. He experimented with hand-holding as well as using a tripod, the convential method.  He got in there with the players, and made their movements look like a dance. He became again, “The White Shadow,” his nickname from his middle-school basketball team. The work got a lot of early attention, and is in the collections of the Art Institute of Chicago; the Columbus Museum of Art; and the Library of Congress, as well as in sports-related venues like The Basketball Hall of Fame. It bridged a gap most of us never think of, really, that gulf between sports and art. From the website of Museum of Contemporary Photography in Chicago: “Richman’s photographs touch upon the roles the sport plays in our society, but more directly deal with the physical movement on the court: the grace and fluidity of its players, its affinity to dance. Unlike most sports pictures, the large-format negatives produced from Richman’s view camera hold the fine details in these moments, rendering forms and expressions with clarity and composure.”

The work was a labor of love, and Brad was living outside DC at the time, working a day job that forced him to travel away from home. But he made some peace with that and brought his view camera along with him to find courts and players everywhere he went, even very out-of-the way places. Some of my favorite pictures from this series are the Evans-esque ones of a country barn or a stucco building hung with a lonely basketball hoop, no kids in sight. Even though he was paying for materials on his own dime, the travel expenses were part of the gig he was already paid to do. He covered all of the lower 48 states during the basketball project - 28 of them paid for, and 20 of them self-financed.

He, too, often found himself on Route 1, and decided to embark on a new project about that well-worn road. This new series cost him more to do, however, as the travel would not be covered by an employer. He would also be away from his family, and he was a young father of two. He shot in New England, D.C. and central Florida, but then (in his words) “gave up.” He felt like the pictures were just not as good as the previous project, though I wonder how much of a chance he really gave it. Failure happens all the time in art; that’s part of the process, isn’t it? He said that the pictures “lacked the animation and spontaneity of the basketball work.” When I imagine what the pictures must look like, I think about Evans, and I think about Robert Adams, and about Cleveland-area photographer Andrew Borowiec. The project is unfinished, and unavailable in digital form, as he stopped making the project before our world really became this digital. He never scanned the work back then, put it away in boxes, and retired early, in his Thirties. He concentrates on being there for his family now, and makes a living doing something a photographer would likely see as more ordinary. He said in an email, “I also got tired of spending hours in the car going photographing, looking to make a connection with a stranger, when I'd rather make a connection at home with my kids.”

I had some trouble accepting his early retirement, not that it’s any of my business at all, really. I suppose I just have a lot at stake in the career I have chosen, which is unfair to project onto him. A lot of people start out one thing, then go on to be another, even after spending a lot of time and work and money on a graduate degree. I suppose I am used to being around people working their way up, or who are sustaining a career that has already made it to a certain level, family to support or not. It’s still hard for me to completely understand the walking away. Richman recently said, “ (I) needed to raise a family so … had to make a choice between art … and a job that paid the bills. I'm happy with my choice, and I've made peace with the fact that it didn't totally work out as a career. But I know I made some great pictures, and as I get farther away from the art world, I also understand that while people may not see my work, no can ever take the journey away from me. Meaning, I took those pictures, I traveled to all those places, and I'm proud of myself for just doing it. I'm satisfied with the means, even if the end didn't work out like I hoped it would. I often think about what I'd photograph now, and everything is just changing so fast with camera phones and iPhones that I wouldn't know where to begin.”

That last part reminded me of what the aforementioned Adams said to me about the digital world we live in. He said that had he grown up today, he would probably have been a painter or an architect, because he loved the darkroom so much, and now has no interest in digital technology. What would the photography world have been like without that man and his life’s work? Not the same.

And Brad’s right about the journey part, which is one of the best things about photography. Like Diane Arbus said, “My favorite thing is going where I’ve never been.” She didn’t stick around, and maybe her work here was done, to paraphrase George Eastman’s own last words. (Please pardon the morbidity.)

Richman may be in retirement from photography, but his pictures are not. One of his photographs is currently in a show at the Art Institute of Chicago called "In The Vernacular."  The photo is really taunting him, as it’s even reproduced on the cover of the show’s brochure, along with a picture by his old teacher, Stephen Shore. The show is up through May: http://www.artic.edu/aic/exhibitions/exhibition/vernacular .

The basketball work can be seen at: www.bradrichman.com .