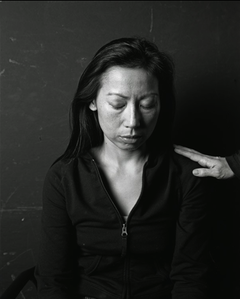 Benjamin Donaldson is one of the artists in a previously-posted show, HOUSED. His picture in the exhibition, of a trailer loaded up with wood stoves, randomly parked on a Hampton, New Hampshire lawn, fits in with his general oddball take on the world we inhabit. It is from a series entitled Terrain, sort of a catalog of the left, lost and discarded in urban and suburban locales. He has work from other projects online, though, that not only show that sense of humor, but also betray a darker sensibility, dealing with themes like death and loss, faith and reason, shock and awe, and daydreaming versus reality.

He is part of the dying breed of 8x10 view camera photographers still shooting sheets of film, using a Phillips camera previously owned by his former teacher, Nicholas Nixon. The influence of his teachers at Massart (Abe Morell, Laura McPhee) and at Yale (Greg Crewdson, Philip Lorca diCorcia) is there, but Donaldson diverges into his own netherworld quickly. The sometime and former painter, filmmaker and actor has projects ranging from the investigation of Catholic churches and priories to perhaps the most moving series, Summerland, a vaguely creepy and charged group of images. The artist is interested in magic and mentalism as well as in the idea of the sublime (he’s from very rural New Hampshire), and combined the two in the concept of making this work.

He hired a hypnotist to work with subjects, after attempting to teach himself how to put someone in a trance. The people pictured are hypnotized and asked to conjure the most beautiful landscape they can possibly imagine. The strobe shocks their minutest details into being for the photograph, an action that even serves as a sort of a light at the end of the tunnel; with subjects’ eyes closed, the death reference is there, as well as the idea of the ecstatic, be it erotic or religious. The background suggests the makeshift backdrop of a pockmarked, painted ship’s hull in Alexander Gardner’s photograph of conspirator Payne, a historical reference that Donaldson intended, and one that betrays another interest of his – studies of history. It is not a beautiful backdrop that disappears behind the subject, but is dirty and smudged, and a metaphor for the often ugly real world. The title, Summerland, references history and as well. His statement tells us that the term is the Spiritualist name for heaven. This guy is smart, and the pictures show it.

He doesn’t shy away from the digital world, either, and the series, Digisnaps, were made on NYC streets with the aid of a very small, unobtrusive point-and-shoot, one he uses mercilessly on the unaware public, highlighting human frailties and injuries and ironies with razor-sharp accuracy. These seemingly easy-to make (they aren’t – just try it) pictures are a nice counterpoint to the elegant large-format work.

Ben was also the subject of a New York Times story, centering around his family’s ancestral home in Connecticut, Leete’s Island, a place that is both lost and preserved, at the same time: http://www.nytimes.com/2008/03/09/nyregion/nyregionspecial2/09leetesct.html