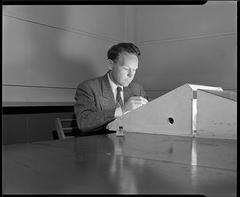 I first met Pete Mauney when I started taking photography at Bard College in the early Nineties. Pete was one of the older kids, been around the darkroom for a couple years; he had long hair in a ponytail and shot 8x10. He owned an old house in the nearby cool, little village,  and knew where all the best photo spots were, like the old cement factory and the quarry. We looked up to Pete. He also had one of the best collections anyone had ever seen, the things displayed all over his house. (Come to think of it, a bit like how my house is now…) He collected photography books and quirky old pictures. He scoured flea markets and junk shops for discarded religious items and outdated medical devices, and even placed one of the the more rugged of the latter (a dental school practice head) on the front porch to scare off the bad neighborhood kids.

He saw himself as the saviour of these lost items, keeping them from ending up in the landfill. He also collected negatives, and unbenounced to me, has gotten around to drum scanning some of them. The collection is fantastic – oddball and quirky and downright weird, but all of that seen through the veil of well-lit and executed commercial photography, many from the Fifties, all from North America. There’s a cheerleader with a baton posing for her picture, with her left hand almost touching some Roger Ballen-esque graffiti alien drawn on her high school cinderblock wall. There’s a couple on the beach with oil wells dotting the immediate background. There’s a prized cow giving us a look, and a Sixties hipster giving us the finger. The latter picture you would swear was an outtake from Stephen Shore’s Warhol-era Velvet Years series. Accidents and grapefruits, blackface and sports teams, a midget and bare breasts. Synchronized swimming and men in a group shower. It’s all there.

What we get to see online is really only a fraction of the thousands of negs he has up on shelves, awaiting the scanner. It is almost ten years of accumulation, some of it at flea markets, but much of it, especially in recent years, from Ebay. He remarked that he used to buy lots, often by the pound, for as little as $50 or $100. Today, more people are collecting, so lots are now going for about $300 for a good batch, something he laments, as he doesn’t have the money to buy everything that he wants. What he wants are images that strike him as weird, or touching. He’s not interested in nostalgia, the whole “good ol’ days” mindset. Instead he tends toward the darker side. He said that, “There needs to be something ambiguous about it, where it’s not completely clear what exactly is going on.”

Look out for a more complete website and book in the future, as Mauney is actively collaborating with writers on a project involving these pictures.

Add this to your bookmarked list of old photo websites: