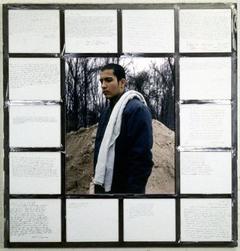 Like many other photographers, I first became aware of the existence of Hart Island via the 1998 Scalo book of Joel Sternfeld’s photographs and Melinda Hunt’s collage pieces in the book, Hart Island. It is one of the off-limits places in NYC, a bit like Governors Island once was, but even moreso. Located near City Island offshore of the Bronx, Hart Island is only about 100 acres, and has lived a few different lives. It was purchased from Native Americans in 1654, and since then has hosted a game preserve, an amusement park, a workhouse, a hospital, prisons, a Civil War internment camp for Confederate prisoners, a reformatory and a Nike missile base. It currently is home to ruins of a couple of these previous uses, plus the city’s Potter’s Field, which contains the remains of 850,000 people. Burials are in mass graves, but with a lot and number system to locate the dead who might later be claimed by family. The remains would then be disinterred and shipped for a more proper, single, private burial. The mass graves include mostly adults, but also infants and the stillborn. Social workers give poor mothers the option for a “city burial,” according to Hunt, but they don’t really explain that it will be a difficult-to-visit mass grave. There are even the bodies of those who have given their bodies to science, once the medical schools have exhausted them. (This is only in the cases where the family does not stipulate the return of the remains afterwards.) It is a quiet, solemn and very sad place.

The site is off-limits to anyone but Department of Corrections officials and inmates from Riker’s Island who bury the unclaimed, unwanted or unidentified dead. Families who can prove that they have a relative buried there are permitted to visit. (I tried to gain access to make my own visit, but the bureaucratic wall is unbelievably high, even when I was an employee of the Municipal Archives, the city agency that houses the burial records for posterity.) Over a decade ago, Hunt and Sternfeld were granted permission to make the pictures that let the rest of us know of the existence of this place. Hunt’s project is not finished, though. She has made it practically her life’s work to create the Hart Island Project: http://hartisland.net/. It is a great resource open to all. The artist, not the City of New York, designed and put up an online database of all the burials, plus worked to give voices to the gravediggers who work there and the dead who were buried there.

Hunt began the project when she wanted to follow in the footsteps of Jacob Riis, who went immediately to Potter’s Field once he acquired a camera, according to the artist in a recent interview found here: http://beta.wnyc.org/articles/wnyc-news/2010/aug/02/hart-island/ I think many photographers can relate to that impulse. It still seems like the city would prefer to keep the place a secret and not let more citizen visitors make the pilgrimage to this place, the largest publicly-funded cemetery in the world. Watching Hunt’s recent documentary might be the next-best thing to having the privilege of going there yourself: http://www.newfilmmakersonline.com/movie-download/8514,2542/Melinda-Hunt...

Online, there is even documentation of a couple illegal trips to the island at one of my favorite NYC websites, Scouting NY: http://www.scoutingny.com/?p=504 and at: http://kingstonlounge.blogspot.com/2008/08/hart-island.html The latter photographer visited with my colleague, the artist Marie Lorenz, who took him there on her Tide and Current Taxi, an art project of hers involving her little boat: http://www.marielorenz.com/ It sounds like they were terrified the whole time. I doubt they will ever go back.