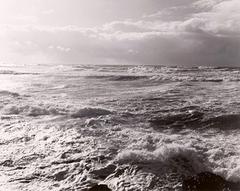 I had the good fortune to sit down recently with Assistant Curator of Photographs at the Yale Art Gallery, Joshua Chuang, who gave me a preview of the long-awaited Robert Adams retrospective. (There was one in 1989 organized by the Philadelphia Museum of Art, but the last twenty years of work obviously got left out.) The event will not only consist of the touring institutional exhibitions, but will also be paired with a series of painstakingly-produced books. Chuang has worked on the entire endeavor directly with Adams himself and Director Jock Reynolds, as well as the master printers at Meridian Printing in Rhode Island over the past few years.

You have probably taken note already that the Yale Art Gallery has made fine new editions of books from the Adams oeuvre, like denver, What We Bought, and Summer Nights, Walking, the latter done in partnership with Aperture, the book’s original publisher. Out in just a couple weeks from now is What Can We Believe Where?, the little brother, in a way, to the massive, three-volume retrospective collection that will be the final word on the photographer’s work: The Place We Live. That compendium will not be available for public purchase until about June, 2011. The title of the larger publication is taken from the well-known essay for The New West, written by John Szarkowski, and is a roughly chronological summing up and coming together of all of Adams’ major bodies of work, from 1964-2009, mostly known, but some unseen. It will give present and future (“lifer”) students of photography with a more whole, rounded view of the artist’s life work, making connections more visible, where they were once not entirely clear. Seeing it all together, edited over years (not months) helps us understand why and what the photographer believes and feels about the world around us.

The books are printed fantastically, with incredible attention to detail, with Adams giving the final word from Oregon on each plate. We will also get to have most of his well-written statements of purpose finally in one publication, in the back of the first two volumes. The smaller book, What we Can Believe Where?, is printed tritoneon a more matte, somewhat more porous-looking paper with a fine stochastic screen. The three-volume set is printed tritone with a more traditional 300-line screen on a slightly more glossy paper, but with new, non-ywlloewing inks. (Look at some of your older black-and-white photo books printed with vegetable-based inks, and you might detect a yellow "ghosting" on blank pages opposite printed images that wasn't visible before with the non-environmentally-friendly petroleum-based inks, which had other problems.) Chuang says that these are the first volumes to have been printed with these specially-formulated inks. The pictures look as good, if not better in some ways, than Adams' fine silver-gelatin prints. This is not merely due to the inks, but to the incredibly dedicated printers and the insistence on a standard of accuracy by the artist and the curator, who also happens to be a photographer, himself.

The first venue for the exhibition is this fall in Canada at the Vancouver Art Gallery, then on to the Denver Art Museum, and then Los Angeles County Museum of Art. The show will wrap up on the East Coast at Yale (but not for a couple more years) before heading to Europe. We will have to sit tight until then, getting lost in time and place in these wonderful new books of photographs.

From the current title’s introduction by Robert Adams:

“What does our geography compel us to believe? What does it allow us to

believe? And what obligations, if any, follow from our beliefs?”

Robert Adams: The Place We Live, A Retrospective Selection of Photographs will be at the Vancouver Art Gallery from September 25, 2010 through January 16, 2011