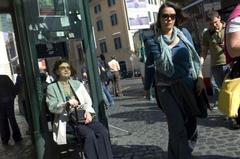 If you are lucky enough to be in Rome this Fall, make sure you visit The Rome International Festival of Photography (FotoGrafia Festival Internazionale di Roma - IX Edizione.) This year’s theme is “Can photography see into the future? Is there a future for photography?” Of special note is new work by Tod Papageorge, whose fairly recent appearances in books and exhibitions in the United States and United Kingdom have presented us with work he made in black-and-white in the Seventies. (American Sports, 1970: Or How We Spent the War in Vietnam from Aperture and Passing through Eden from Steidl) Papageorge is an American art photographer who began taking pictures in college, while he was studying literature. He moved to New York and became a part of the New York City street photography movement of the 1960’s, along with the likes of Garry Winogrand.

Tod is still out on the street, but across the pond in this exhibition. In a UK Guardian interview, he was asked what his “Dream Location” would be. His answer: "Rome. Or even your wonderful London." His dream came true just under a year later when he was invited to make work on the streets of Rome during an extended visit during the summer of 2009, showing his brand-new work at the American Academy in Rome. It wasn’t his first time there, but he had never worked as extensively as he did that summer. He picked up the Leica M8.2, and headed out to explore the City of Light, often after 4p.m. He said, “The light began to settle down into a kind of generalized glow just about then, and the heat became more bearable.” Some of this work is online here: http://www.aarome.org/index.php?rt=news=98

His 2010 solo show of operatic new color work made with the digital Leica M9 consists of about 30 prints showing at MACRO (the City of Rome Museum of Modern Art), Testaccio branch, opening on September 23, and continuing through October 24, 2010. The space is a former abattoir, and the neighborhood is not touristy, more working-class, according to Papageorge. There are also three other exhibitions, but his is the only one-person show. OPERA CITTA is also being presented in an accordion-style book of 21 pictures, curated by Marco Delogu and published by Punctum Press in Rome, and will be available through DAP. The work from Rome is both subtle and patently clear, filled with gorgeous light and intonation. It presents the viewer with slices of the high-drama, fast-paced contemporary lives of Italians and tourists mingling with, and set against,  an ancient background of religion, history and art.

To read the interview from last summer:

And the one from London:

And the one about the Central Park “Eden” project: