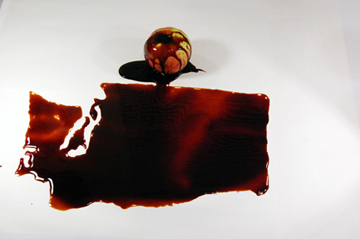 Consumption is a small but spectacular show of color photographs by Kelsey Zyvoloski within the larger group exhibition HOLY MOLY: The Spirit of Food and the People Behind It at Golden Belt's Room 100 Gallery in Durham, NC. Zyvoloski is motivated by the fact that many people are oblivious to the origin of their food. Her Consumption series focuses on the distance food travels to reach our local Food Lion, Harris Teeter, or Whole Foods. In one series she buys fruits and vegetables and then draws their country or state of origin with molasses to represent the amount of oil it took to transport it to NC. Even though she utilizes molasses instead of oil because it is non-toxic, I thought it was oil when I looked at the photographs. One tablespoon of molasses represents 100 miles the produce had to travel to North Carolina. In another series of photographs, she chews produce, spits it out, and forms the mush into the shape of its country of origin. Guatemala is cantaloupe orange and Mexico is mapped with pale green cucumber. Both series are elegant even though they are speaking about waste and excess. I am struck by the simple gestures of this work to reveal our complicity in the oily and rotten system of food production and consumption – gestures we are all familiar with: purchasing, chewing, spitting, consuming, and playing. Humor can be an excellent strategy to startle people out of their complacency and ignorance. Beauty is another. Zyvoloski employs both effectively. She makes me want to feast and fast, play and revolt, boycott and participate all at the same time. Zyvoloski is from Raleigh, NC. She received her BFA from UNC, Chapel Hill in 2009. She has been playing with her food since 1987.