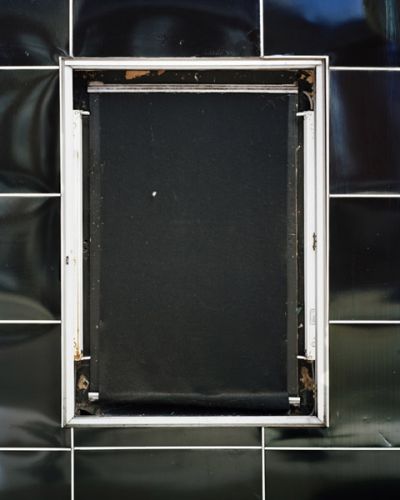 JOHN LEHR "STET" OCTOBER 28 - DECEMBER 4, 2010 OPENING THURSDAY, OCTOBER 28TH FROM 6-8 PM KATE WERBLE GALLERY 83 VANDAM STREET NEW YORK, NY 10013 From the press release: "John Lehr's first solo exhibition at Kate Werble Gallery is titled Stet, the proofreading term meaning let it stand. Stet presents Lehr’s new series exploring the border between the straight photograph and the constructed image. Lehr's meticulous attention to the photograph translates into a series of works with hyper-real clarity and movement. His work maintains an illusion of stability, but the tension between materials captured within each picture creates a subtle unease, a record of the failed attempt of commercial language to reward desire. In Marquee, the emptiness of the soft, black felt of the blank marquee versus the surrounding plastic tile is highlighted by the detail of a single piece of hair and dust caught on the surface of the felt. Through formal manipulation, Lehr captures the vernacular of the American consumer landscape and moves it to an abstract plane. The duality of photography made from taking a photograph of a print - often the desecrated signage within his image is itself a digital print – further complicates the idea of a straight photographic process. Lehr makes his work in his studio using a pigmented inkjet printer. The ink quality, surface of the print and paper texture are critical within the piece as a whole, giving the process of printing his photograph an individuality within an artistic medium that tends towards a denial of the unique object." www.katewerblegallery.com