"Lee Friedlander: America By Car" at the Whitney Museum of American Art 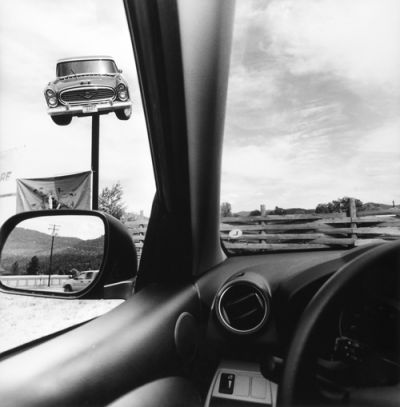 Lee Friedlander (b. 1934) has long been recognized for his compound street photographs, which document "social landscapes" through a complex arrangement of reflections, shadows, street signs, and self-portraits. For his latest book and current exhibition, "Lee Friedlander: America by Car," the photographer went on a decade-long succession of road trips driving on US highways, city streets, country roads, and thoroughfares. In the tradition of other itinerant street photographers, such as Robert Frank and Garry Winogrand, Friedlander's work examines the expanse of infrastructures and social constructs that pervade the United States. And now, at age 76, Friedlander is still demonstrating his ability to revisit, challenge, and extend his well-established photographic vocabulary.

By photographing through car windows with a Hasselblad Super Wide, Friedlander uses his camera's foreshortening perspective to methodically construct images that operate as a frame-within-a-frame (often with rear-view mirrors and side-view mirrors acting as additional frames). The photographs focus on the makes, models, and hardware of his rental cars while also considering the environments beyond the cars' interiors. As consistent with his past work, Friedlander is not at all timid about including himself in these photographs either. Whether it is the flare of his flash or his reflection in a mirror, his presence is felt in every image.

Pictured beyond many of Friedlander's cars' windows are especially bleak locales such as dilapidated Rust Belt factories, suburban homes in California, and a car graveyard in Arizona. In this context — when gazing through a rental car window — the visual contrast trades cynicism for wit. And even though each photograph is muddled with information, Friedlander is still able to establish a compositional order. The physical and figurative relationship that coexists between the car interiors and the momentary scenes beyond each window provides a timely, often-satirical commentary on contemporary America.