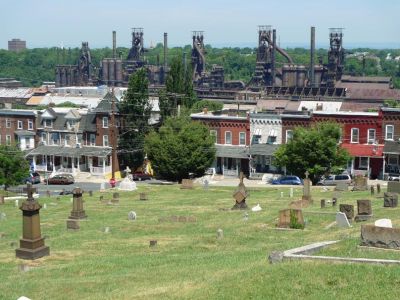 This week, on Sunday November 10th, in 1935, Walker Evans visited Bethlehem, Pennsylvania, a small city right next to Allentown, in an area well-known for its steel production, the Lehigh Valley. Accompanying him was photographer Peter Sekaer and Sekaer's wife, Elizabeth. When the trio arrived here, they were not very far into the first federal assignment trip that produced many of the pictures that make up his oeuvre, "American Photographs." This particular day, he made several well-known pictures: of the local train station, of the bridge to New Jersey in neighboring Easton, and in St. Michael's Cemetery alone, made two that endure: the sculptural portrait grave of Maria Fanella and her son Antionio Castellucci, and the view of brick rowhomes before the blast furnaces and stacks of the dark and formidable steel mill, punctuated by a grand cross in the immediate foreground.

I am happy to report that first grave still stands by the street, but sad to report that the cross in the landscape is gone. The photo that appears here is not shot from the spot where Evans stood with his long lens, but from a bit higher and to the right of his probable station. (Ann account of the visit is in the Mellow biography.) This is probably not a surprise to some reading this, as many photographers have clearly made the pilgrimage to Bethlehem. A simple Google search confirms this. The trip was especially important for me to make, as my grandfather grew up on East 3rd Street, one block over and a few blocks down from this site on East 4th Street. I had not been there since I was a child. My vague memories of that previous trip involved a natural spring and a fossil; that's about it. This summer, I finally learned that my great-grandfather, a Hungarian immigrant, built two houses and a coal distributing company, East End Coal Company, directly across the street from the Bethlehem Steel Mill, where he and his sons had also worked, according to census records. My great aunts still live there, and one told me she recalled walking past the cemetery every day on the way to school. She had never heard of Walker Evans or seen his work, but she happily drove me around to check in at the various locations. The cemetery, owned by the Holy Infancy Catholic Church, is somewhat in disrepair, but much less so than it has been in previous decades. A newspaper search in the Bethlehem Room of the local library contains many articles about annual volunteer clean-ups over the years, organized by the St. Michael’s Preservation Association. Many stones had been toppled due to vandalism, including the one in question, I thought. John T. Hill, Evans's executor and a well-known voice in the Evans world, offered this, that the most likely "story being that the family removed the cross and angel to another location," and that there is "no information about the new location." So the cross is gone, but much of the once grand steel mill remains, though it is really mostly just that right now: remains. The security guard told me it has hosted production of movies like both "Transformers" movies. The sight of celebs like Catherine Keener jogging is not so strange around these parts, or so I hear. Part of the property is now a Sands Casino, and the other part stands in anticipation of the future opening of the National Museum of Industrial History, in partnership with the Smithsonian.

Check out their well-designed website in the meantime: www.nmih.org. The small city seems to have its head on straight about repurposing and reinventing itself and celebrating its heritage, at the same time. If you don't mind a lot of people in town, and are in the mood for some live music, visit during the annual music festival, another reinvention that proves he town knows how to keep moving forward: http://www.musikfest.org/. As for the local Evans tour and exhibition, it already happened in 2008, sponsored by the South Bethlehem Historical Society and the Delaware Lehigh National Heritage Corridor: http://www.southbethhistsoc.org/eventsWalkerEvans.htm . Proceeds went to help with cemetery upkeep. Donations in general can be made online to both of those organizations: www.southbethhistsoc.org and www.delawareandlehigh.org. For more details and photos from Evans and Sekaer's trip and correspondence, look in the new book on Sekaer, "Signs of Life." Walker Evans III was born on November 3, 1903 to Walker II and Jossie Evans in St. Louis, Missouri. Happy Birthday.