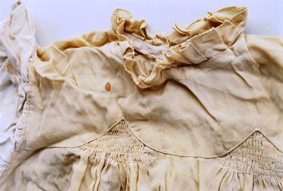 The Third Gallery Aya is pleased to announce a solo show called "hiroshima six" by Miyako Ishiuchi which runs from November 13 to December 18, 2010. This is her first exhibition in 5 years in the Kansai area. "hiroshima" was first shown at Hiroshima City Contemporary Museum in 2008. The exhibition and the photo book "hiroshima" were awarded the 50th Mainichi Art Award. Following two big retrospective shows, these works were shown at Sakima Museum, which is located next the U.S. military base in the Futenma. This series shows the contrast between a complicated theme and a beauty of objects which continue to live in Hiroshima. This exhibition is of new work depicts objects given to Miyako by the family of the victims in 2010. This will be the smallest and most concentrated of the "hiroshima" exhibitions. These objects have existed for 60 years after the owners have been lost. In becoming photographs, their existence grows more vivid. On December 14th we will hold the talk between the artist and Yoshioka Hiroshi who is a professor of Kyoto University . Please join us.http://www.thethirdgalleryaya.com/