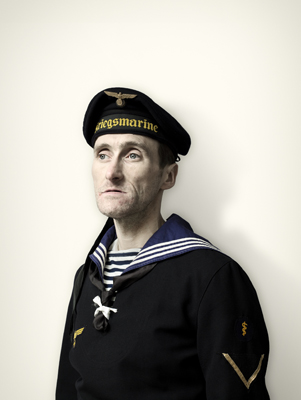 Photography has long held an intrinsic relationship with war. As early as the 1860s, photographers such as Matthew Brady, Alexander Gardner, Timothy O'Sullivan, and George P. Barnard all directed their photographic efforts to memorializing — and often monumentalizing — the transitory scenes of the battlefield. So, shouldn't there be a natural, if not necessary, place for such a photographer at a modern-day war reenactment? London-based photographer Jim Naughten (b. 1969), whose exhibit "Re-enactors" is currently on view at Klompching Gallery in Brooklyn, New York, through December 18, 2010, proves that there is. For the past two years, he has followed some 20,000 re-enactors who gather annually in Southeast England. Using a small wedding tent as a portable studio, he took many of the attendee's portraits while also photographing the fantasized front-line mêlées.

Inspired by Richard Avedon's In The American West, Naughten's portraits present isolated figures taken out of their environment. As a result, the subjects and their attire provide the viewer with the only available visual cues and context. Each portrait subject takes on the appearance of yesteryear as they role-play British infantrymen, US Medics, civilians, and Schustzstaffel (SS) Officers, among others. This 1940s mystique is only heightened by Naughten's use of a muted color palette, which recalls the limited color gamut of Autochrome Lumière, an early color photography process. The titles of each subject, along with the details of his or her garb, become evidence to the scrupulous details that re-enactors go through to bring back the past. What serviceman, for example, would be without his spoon?

Naughten also documents the re-enactors' vehicular artillery in the field. Through post-processing, he is able to remove the external environments and enhance the shadows cast by each truck, tank, and automobile. Placed against a light white background, these objects once used for mass destruction are now shown for their aesthetic value—similar to the affect of Raphaël Dallaporta's Antipersonnel series.

Also included in the exhibition: one of Naughten's panoramic views of the battleground, full of glorified combatants, smoke, and pretend gunfire. This photograph and his other combat-zone panoramas can be seen as historical citations while also existing in the contemporary milieu. His subjects, in other words, are not actual militiamen but rather tableaux vivants. In another reference to the past, the print itself appears especially light, as if it were decades old and bleached by the sun.

During the past few years there has been an uptick in news media questioning the veracity of wartime images. (See: "New Doubts Raised Over Capa's 'Falling Soldier'" and "In an Iranian Image, a Missile Too Many") Given this, Naughten's intentionally staged photographs of re-imagined war become all the more timely. They may very well give new meaning to the term "theater of war."

"Re-enactors" is on view at Klompching Gallery through December 18, 2010. Signed copies of the "Re-enactors" book are also available for purchase through the gallery.