The Crisis of LGBT Youth Homelessness at The Sanctuary in Troy, NY 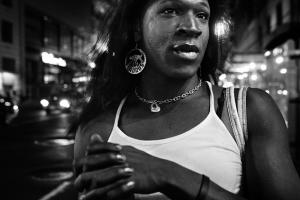 Just opened on November 19th: Invisible: The Crisis of LGBT Youth Homelessness by photojournalist Samantha Box The Sanctuary for Independent Media Upstate in Troy, New York From the Sanctuary's website: Samantha Box, a photographer based in New York City, was born in Kingston, Jamaica in 1977. Having worked for many years in the media - first at the New York Post, a daily newspaper, and later at Contact Press Images, an international photojournalism agency - she decided to attend the International Center of Photography in 2005, where she pursued a certificate in Photojournalism and Documentary Studies. For the past 4 years, she has dedicated herself to photographing homeless lesbian, gay, bisexual and transgender (LGBT) youth in New York City. Box says: "In 2005, disturbed by the silence surrounding this issue and seeking to put a face on this little-known crisis, I began photographing the residents of Sylvia's Place (MCCNY Homeless Youth Services: Sylvia's Place), New York City's only emergency shelter for homeless LGBT youth; its 30 beds comprise over half of the shelter space specifically designated for the upwards of 8,000 homeless young LGBT people in New York City. Using the shelter as a “home base”, I have spent countless hours with these young people, bearing witness to hidden and intimate aspects of their existence: working as a prostitute on “the stroll”; crying at the grave of the mother that left them too soon; kissing their new boyfriend; spending a last Mother's Day with children that they will never see again; moments of introspection." The Sanctuary for Independent Media is in an historic former church at 3361 6th Avenue in north Troy, NY (next to Albany) (The Sanctuary hosts screening, production and performance facilities, training in media production and a meeting space for artists, activists and independent media makers of all kinds. Call (518) 272-2390, email info@MediaSanctuary.org, or visitwww.MediaSanctuary.org for directions, hours and more information.)