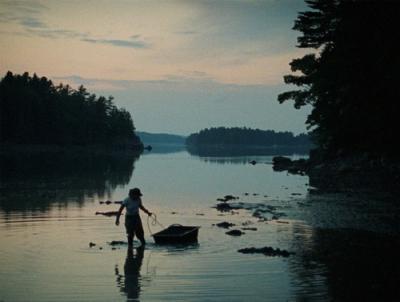 "Double Tide", Sharon Lockhart's 2009 film about the arduous process of clam digging in Maine is a meditative look at landscape and physical labor. The film, comprised of two 45 minute shots, one at sunrise and the other at sunset, observes the lone ritual of a young woman searching for clams in a murky tide, part of a slowly disappearing tradition. Shot entirely from the same angle, we watch as the woman slowly moves across the screen gathering shells -- often with difficulty -- while following the recessing tide. During the 90 minutes of the film, we are drawn into an encapsulated landscape and one person's relationship to it, bringing to mind both a tradition of early American Romantic painting as well as performance art from the 60's and 70's. Sharon's work often focuses on the sensitivity of human relationships, and here we see her exploring that relation with nature. Demanding us to observe a single picture over the course of the film, we're brought into a state of contemplation not only regarding the representation of nature but also what it means to wield it. Throughout the film the demands of the woman's labor remains checked by the sense that natural processes remain beyond our control. The woman's work unfolds only as her body and the tide will allow it. On occasion we hear the sounds of jet planes passing overhead or motor boats going by, and even though they indicate humanity's broad presence in the most remote places of the world, within the context of the film these noises feel like dwarfed, futile attempts to preside over the natural forces. What really stands out about Lockhart's work, however, is that she keenly observes simple actions and induces reflection about these scenes as individual images. While many photographers attempt this, she succeeds by asking the viewer to pause and consider every moment as its own. By doing so, we begin to examine what it is that we are really seeing.