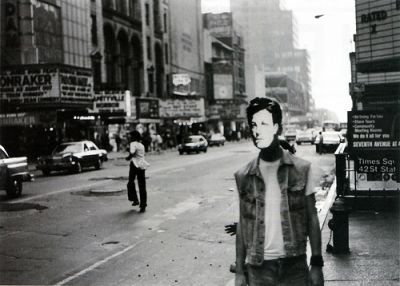 Kudos to NYC's New Museum of Contemporary Art for a last-minute addition to their Winter schedule. In the lobby of the Bowery art space through January 23, 2011 will be the now controversial video "A Fire in my Belly" that was unceremoniously, suddenly removed from view at the National Portrait Gallery of the Smithsonian Institution in Washington D.C. David Wojnarowicz was an artist who used photography and film, and who died of AIDS in 1992. A watered-down 4 minute cut of the original 1987 video was on display and outraged a conservative religious group, the Catholic League, led by Bill Donohue, who threatened the NPG until they relented and censored the piece. The misunderstood video had been made in response to the death of his friend, photographer Peter Hujar, and contained, among other things, religious symbolism that was subverted for a purpose (not perverted, as Donohoe's reading has alleged.) The artist presented a shot of insects crawling on a crucifix in an attempt to express martyrdom and vulnerability in the face of the violence and cruelty he saw in modern life. There was a wonderful piece in the New York Times this week by Holland Cotter, in which he explains that in "Wojnarowicz’s nature symbolism — and this is confirmed in other works — ants were symbols of a human life mechanically driven by its own needs, heedless of anything else. Here they blindly swarm over an emblem of suffering and self-sacrifice." (fromhttp://www.nytimes.com/2010/12/11/arts/design/11ants.html?_r=1=desig...)

One would think that a viewer who enters a show subtitled, "Difference and Desire in American Portraiture,” would understand and accept the thesis, and enter the space with an open mind, ready to see and hear and feel things outside of his/her own realm of experience. If you haven't seen the video, hurry down to the New Museum and decide for yourself: 235 Bowery, NYC Wednesday 11-6 PM Thursday 11-9 PM Friday, Saturday, Sunday 11-6 PM The Museum is closed to the public on Monday and Tuesday Free Thursday Evenings (from 7 PM to 9 PM) http://www.newmuseum.org/exhibitions/