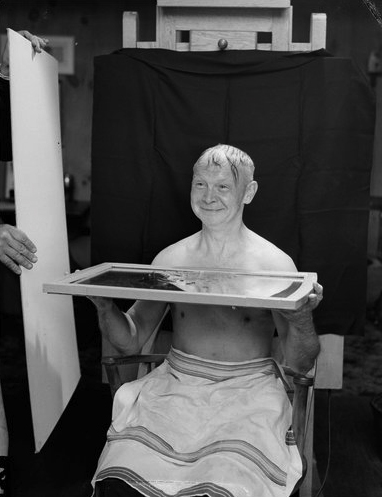 The wonderful show "Norman Rockwell: Behind the Camera" has made its way to New York City, via Brooklyn. Of course, it's not a secret that painters and illustrators often use source photographs for their work, but how may of them make those elaborate photographs in a studio set with full lighting, casting and a camera crew? (This is all before the likes of Crewdson, Sherman, Simmons and Wall.) The pictures can stand alone, though they are presented in this exhibition with the painted pieces they ended up becoming. The images remind one of staged Americana in early television, advertising and Speed Graphic new photos of the 50's. A favorite moment is when it is revealed that a person walking was really just one standing still, but with a book propped under part of the foot. Another is when a lively ponytail is held up, not by it's own springy-ness, but by a cute assistant's hand. Everything becomes clear; everything is revealed. There are unseen images, many just discovered during the scanning and archiving of the pictures from his studio, which include about 20,000 negatives. For a previous Daylight post about his work:http://www.daylightmagazine.org/blog/2010/8/5/834 “Norman Rockwell: Behind the Camera” - through April 10, the Brooklyn Museum, 200 Eastern Parkway, at Prospect Park, www.brooklynmuseum.org