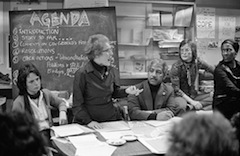 I try to focus my weekly contributions to Daylight Daily on community photography programs, or individual artists who are engaged in community-based projects. Recently, I read an article online from the British Journal of Photography that was written this past June (yes, not very timely, but maybe you missed it too) about the closing of Photoworks Westminster, a community arts group in London that was formed in 1976 (originally formed as the North Paddington Community Darkroom, or NPCD). Although the article focuses on the activities of this specific organization, and the circumstances surrounding its demise, the author, photojournalist Philip Wolmuth (and founder of NPCD), also makes many great points about community arts projects in general. Wolmuth describes community-based arts projects as a "more radical critique of the role of the photographer and the use of photographic imagery" than the somewhat less politically engaged field of "socially concerned" photography, embodied by the work of Jacob Riis and Lewis Hine. He writes, "The early community arts groups sought to democratize the arts - to engage those who did not otherwise relate to the 'mainstream' arts world - by making the arts relevant to their daily lives and experiences. The aim was to empower local residents… by encouraging a critical approach to conventional forms of representation." The article - found here - is definitely worth a read, and makes me wonder, what other community-based collaborations exist today? Do community-based projects have to necessarily be political? How are artists reinterpreting the intersection of documentary practice and public engagement?