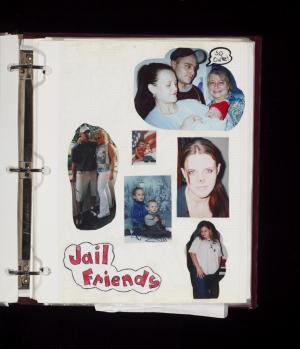 "Scrappin Upstate", a project facilitated by photojournalist Brenda Ann Kenneally, opens March 8th in Troy, New York. The installation is part of her ongoing "Upstate Girls" project, in which she has worked with women in tough situations in North Troy (next to state capital Albany) for the past seven years, documenting their lives and loves, their joy and pain - in school, at home, in jail, in hospitals, in court. She says, "The years that I documented The Upstate Girls have produced nuanced stories that are a mirror for young working class young people in America to realize their common strengths and identify moments where social change is possible." This particular series consists of scrapbooks made by some of her subjects,  in which current pictures and writing are paired with copies of pages form Victorian-era ladies' scrapbooks, full of ephemera like calling cards from the women who once peopled the bustling, thriving city of North Troy. This city was supposed to be a  prototype for Industrialed America; after all, it was the home of Uncle Sam, whose grave you can go visit today. At the end of the 19th century, Troy was one of the richest cities in the country. Today, most households in the neighborhoods where the Upstate Girls live receive public assistance, have loved ones in prison, and survive on minimum wage (or close to it)  made from service jobs.  Troy was once the "Collar City," and was a major manufacturing hub. Today, despite the colleges and a private school there, Troy appears to be a city well into decline, with abandoned buildings, shops that only last a few months, and drugs taking over blocks. Kenneally, however, is part of a bright spot, or several of them, being created in Troy today. The venue for this exhibition is also one of those bright spots, The Sanctuary for Independent Media, a repurposed old church that houses screenings, art shows, live music and lectures as well as a successfull teen video workshop. The "Scrappin' Upstate" workshop began at the aptly-named Sanctuary during “Troy Night Out,” in 2009. The young people who created the pages lived as extended family in homes directly on the block of the Sanctuary.

More of Kenneally and her colleagues' pro bono endeavors are collected on the website, The Raw File, such as a recent show, "This Time in America," at Art Basel in Miami, and also "The Tribe", which is a series about the foreclosure crisis in my own backyard in New Haven, CT: http://www.therawfile.org/stories/thetribe.html Many of the photographs are organized and edited into slide shows with audio from interviews with the subjects, thus giving them a voice and making the full scope of the powerful stories apparent to any viewer.

See the scrapbook project at