Is it art? Is it fashion? Who cares. DiCorcia on view at Zwirner 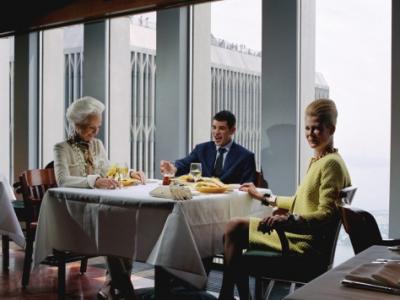 Is it art? Is it fashion? I have to say, in this one instance, that I don't care. All I know is that there is more to it than meets the eye, and it moved me. Philip-Lorca diCorcia's retrospective-y exhibition of his Eleven (hence, the title) W Magazine fashion stories is now on view at David Zwirner Gallery in Chelsea. The image on the invitation card, and on the cover of the book of the same name, is devastating. That is, if you look at it closely, and understand the artist's whole oeuvre and know what he might think of the world we created and now inhabit, with all its problems of class and indifference. The woman's shadowed face on the right in the image is terrifying, and even more so when you realize where she is sitting, and when. The picture was made in September 2000 at Windows on the World in the World Trade Center, and the graphic architecture of the top of the other tower is clearly visible and larger than life in the background, sprinkled with tourists taking photographs, like miniatures from a train set of old Americana. If you think about the artist's last project, Lucky 13, and read the interview with him in which he stated that the images of the suspended strippers on poles were about the images of the falling figures from the top of the WTC on September eleventh, then you know that these innocent little figurines in the background, and this location itself, mean a great deal to him as well as the socialites at the table, and should to the viewer when looking at this work. The figures in almost all of the pieces look uncannily like wax, propped up like a really skillful, CGI-ed post-mortem photograph. The un-glassed inkjet prints look painterly, as the ink feels very thick and heavy and has a lot of presence while it almost blurs the edges. This is not all about luxury and style and extravagance, though one could easily just experience it on that level. But you'd be cheating yourself out of meditating on and understanding the complexities in this work. Sometimes, in order to comment on something, an artist, like a spy, must cloak oneself in camouflage, even if it they are high-end designer fatigues.

The big white book, eleven inches wide, is even better than the show, and that is saying a lot. It contains many more pictures, and moves you through a space that is knitted from scenes all over the world, doubling back to New York, making the reader feel like he or she is travelling through time. The book is published by the new imprint, Freedman Damiani, a collaboration between the Bolognese publisher and the former W Creative Director, Dennis Freedman. There's a good new interview with PL here: http://runway.blogs.nytimes.com/2011/02/11/q-a-philip-lorca-di-corcia/  In it, he reveals the prescient nature of the book: "It’s strange that the cover of the book is of the World Trade Center and the first image in the book is Cairo on fire. All that we’re hearing now about what has been happening in Egypt under Mubarak was happening then. If I was absolving my conscience of something it was to suggest that not everything is perfect and fashion isn’t just about clothes and beautiful people."