Google Street View: The World is Our Studio 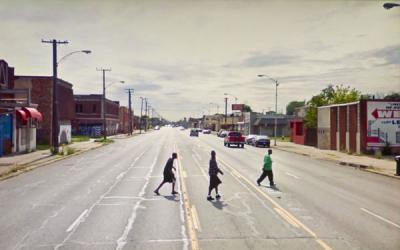 What photographers do is take the real stuff of the world and edit it down, noticing, choosing, pointing, framing, removing something from one context and placing in another, hopefully transforming it in one way or another. What if there is a second camera directly involved, or nine? Google Earth and Street View are adding another layer to the way we can interact with our environment, all from the comfort of our home computers or our iPhones. We can fly around the world in an instant, see the activity along roadsides and curbsides from Kalamazoo to Kishniev. If photography itself is really a form of editing, does it matter that the initial camera operator is not the artist himself, but a spooky, indiscriminate Google car thousands of miles away, connected by satellite and signal? Does authorship even matter, or is the anonymous, motor-driven nature of this image collecting an interesting conceptual layer? Anonymous people shot by an anonymous camera.

Appropriation is nothing new in the art world, from Richard Prince to Carrie Mae Weems. Having a DP shoot your film is nothing new, either, like Gregory Crewdson and legions of film directors. Having a robot shoot your raw material is a little newer, though. Just like in the real world, most of life along the roads of Street Viewis repetitive and mundane, but when it isn’t, it’s shocking and wonderful. Sure, most of what gets highlighted from Google’s database online is merely silly, scary and plain old strange; fortunate findings of unfortunate occurrences appear on websites with names like StreetViewFun and StreetViewGallery. Photographer Benjamin Donaldson has been using serendipitous images from Urlesque’s “Top 10 Moments Caught on Google Maps Street View” in his undergraduate Introductory Photography lectures since they appeared in 2009. What’s out there? Fires, accidents, a Viking quest battle royale, flashers, those who have fallen and can’t get up, dead deer, Horse Boy, firemen coaxing down a cat in a tree, fence jumpers and crimes in progress.

Photographer Michael Wolf won an honorable mention in the most recent World Press Photo Contest for his series of pictures captured via Street View, entitled "A Series of Unfortunate Events," a prize that was hotly debated and stirred up controversy. Purists saw the award as unfair. After all, Wolf didn’t “take” the photos in person with his own camera. He did, however, “make” them, in a way, by the act of editing Google’s world in the same way that he would otherwise edit the real world: with a camera in hand. How different is this from Garry Winogrand’s steer crossing the road, or Walker Evans shooting from an immutable, unstoppable train window in the Fortune magazine portfolio "Along the Right of Way"? It’s not the same, exactly, but it’s not utterly different. It is conceptually different, with an added layer of meaning attached to the project, since the pictures are captured not by a human who chooses where to stand and how to frame, but by a robotic car, clicking pictures every few meters, without cognitive reasoning, and involuntarily, like a heartbeat.

As with any photography project, some image-makers are more interesting than others, and some are artists, while others are entertainers. After all, the real stuff of the world was already available already; whether it’s in person or on screen might not matter so much. Two of the most compelling examples came into my inbox this week. Photographer Jon Rafman has posted a series on www.9-eyes.com that includes pictures you can hardly believe exist, full of prostitutes, Segways, one unicycle, accidents, the Rod Stewart Fan Club, a whale and birds and a human suspended in air (separately). The improbability of real life events and the wonder of the wide world seem to be a subject of this collection of images. I felt as if I had visited places I never even knew existed, and that I had a better idea of what life might actually be like in a far-flung place only shown to us previously in professional, commercial photographs. Street View shows us, with a heightened sense of super-reality, what the glossy travels mags leave out, like a boring corner hosting a kid fallen off a bike or a traffic stop gone awry. How great and wild and weird the world is.

Another photographic artist making carefully-edited work in the same way is Doug Rickard, whose project, “A New American Picture,” debuted late last year at Le Bal during ParisPhoto: http://www.le-bal.fr/fr/mh/a-new-american-picture/ , and as the subject of a limited-edition Schaden book: http://www.schaden.com/book/RicDoueAN06296.html . Rickard chooses to be much more narrow in focus, and not so interested in the sensationalist and silly. His piece is about poverty in America. The Google car goes down every street, and in so doing, traverses the streets in those “bad neighborhoods” that many people actively avoid, but also those same street corners and curbsides that many other people cannot escape. Scenes from Detriot, Memphis, Oakland, Camden, NJ and more picture mostly African-Americans, and mostly run-down, neglected neighborhoods. Graffiti, abandoned cars, a man pushing a shopping cart full of cans, the projects.

Citizens are frozen in time, forever disobeying the “No Loitering” signs pictured nearby, a 21st century response to Robert Frank’s “The Americans.” Walker Evans’s Depression-era photos come to mind, as do Paul Graham’s from “ A Shimmer of Possibility.”  The photos are unflinching and damning, even though the initial camera operator couldn’t flinch anyway. The pictures visually also remind one of Paul Fusco’s “RFK Funeral Train,” in that there are regular American people seen alongside a route, often looking at the Google car, caught in mid-wave or shout, barely making contact with the lens in that split second as time, and the car, drives on. There is no coffin of a much-loved American icon on board however, and no one has a hand on heart or in salute. Instead, people sometimes stop to see and be seen by the Google cameras, as if to say, “Take my photo. I am here. I exist.” (They sometimes stop to flip the world the bird, in the 9 Eyes series, at least.) There is nothing funny, however, about Rickard’s series. Instead, it shows deadly-serious devastation. He is telling us to look around, to pay attention, and not to lie to ourselves and pretend that this America does not exist.

"...all of consciousness is shifted from the imagined, to the revisive, to the effort to perceive simply  the cruel radiance of what is. This is why the camera seems to me, next to unassisted and weaponless consciousness, the central instrument of our time." -James Agee, "Let Us Now Praise Famous Men"

(Rickard’s other interest in pre-existing photographic works and archives, anonymous or well-known, was the subject of last week’s post: http://www.daylightmagazine.org/blog/2011/2/27/1044 There, you can also find a Gerry Badger essay about Winogrand's manic overshooting at the end of his life, and discusses the problem of "a mindless accumulation of automatic images, whose meaning at best is peripheral and uncertain, whose tenor at worst is dumbly exploitative and reactionary": http://www.americansuburbx.com/2011/03/garry-winogrand-i-dont-give-rap-a... )