The INSIDE OUT Project | Artocracy in Tunisia 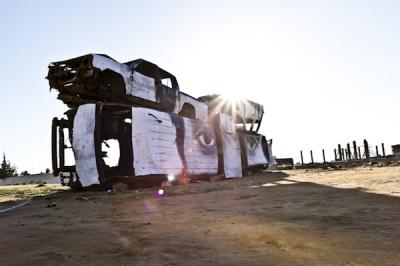 INSIDE OUT is a large-scale participatory art project that transforms messages of personal identity into pieces of artistic work. Everyone is challenged to use black and white photographic portraits to discover, reveal and share the untold stories and images of people around the world. These digitally uploaded images will be made into posters and sent back to the project’s co-creators for them to exhibit in their own communities. People can participate as an individual or in a group; posters can be placed anywhere, from a solitary image in an office window to a wall of portraits on an abandoned building or a full stadium. These exhibitions will be documented, archived and viewable virtually.

The project is an affirmation of one of the fundamental goals of documentary photography, which is to make the invisible visible; to document the stories and people who otherwise are not being heard. The project also reminds us that we, photographers and otherwise, need to remain engaged with our communities.

The INSIDE OUT project is a creation of the street artist JR, who is the recipient of the 2011 TED Prize (watch JR's TED talk here). Among some of his other past projects are Portrait of a generation  (2006), large format portraits of the suburban "thugs" that were posted in the bourgeois districts of Paris; Face 2 Face (2007) involved posting huge portraits of Israelis and Palestinians face to face in eight Palestinian and Israeli cities and on both sides of the Separation wall; and his project Women (2008) which uses his massive portraits to underline the dignity of women all over the world who are often the targets of conflicts.

To become involved go to http://www.insideoutproject.net/

JR on "Artocracy in Tunisia: Art, People and Freedom":

Six Tunisian photographers travelled the country to take pictures of 100 "normal" Tunisians representing the Tunisian diversity: men and women, young and old, from North, South, East, and West, rich or poor, civil servants, business people, workers, farmers, unemployed, and much more….For a country which has only exposed in the streets the portraits of the ruler, this makes quite a difference.

For the first large street exhibition in a nascent Arab democracy, the posting promised to be surprising and the confrontation with art not always simple. Our first two days were quite hot (insulted in La Goulette the first day, posters taken down in Tunis the second day). So we decided to go to Sidi Bouzid (where it all started), an isolated region, to work with those who did the revolution before coming back to the popular districts of the capital.

And then, we received a warm welcome in Sfax, Sidi Bouzid, Le Kram where men and women (OK, mostly men) have asked questions, challenged the project, raised objections, posted with us, explained the project to their neighbors…

We come back with hope that Tunisia will become a country open to art as Spain after Franco or Berlin after the wall was taken down.

More images from INSIDE OUT in Tunisia: