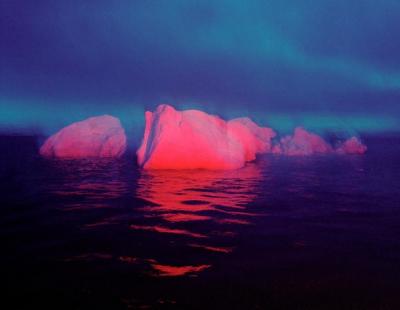 The Cape Farewell project, created in 2001 by artist David Buckland, is a multidisciplinary project that brings together leading artists, writers, scientists, educators, and media in an ongoing attempt to instigate a cultural response to climate change. At the core of its mission is to create stories and art with a narrative of how climate change is impacting the wilderness and mankind, based on the notion that artists can engage the public through creative insight and vision: "The arts are a core part of the Cape Farewell project: one salient image, a novel or song can speak louder than volumes of scientific data and engage the public's imagination in an immediate way."

Their current exhibition, U-n-f-o-l-d, is a delightful mixture of fiction and non-fiction; the photography and other artwork in the installation treads the waters between documentary and fine art, embracing both the subjective, personal response and the traditional role of documentary to bring about social change.