An Interview with Alejandro Cartagena 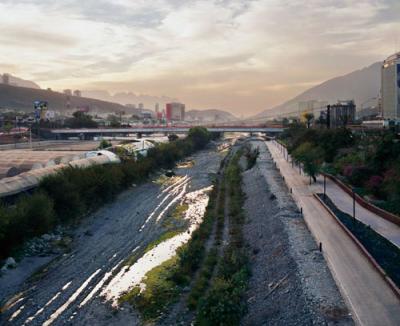 In early 2010, photographer Alejandro Cartagena was awarded the 2009 Critical Mass Book Award for his project, Suburbia Mexicana. Mr. Cartagena’s monograph, an upshot of this award, is now available for purchase from the Daylight store. The book, which was published in partnership between Daylight Books and Photolucida, includes an introduction by the Curator of MoCP, Karen Irvine, as well as text by Mexican photographer, Gerardo Montiel Klint, and an interview conducted by Lisa Uddin. The photographs in the book have a purposeful geographic focus—the city of Monterrey, Mexico. By investigating life and landscape within the limits of Monterrey, the photographs from the book also manage to infer not just regional, but universal, human and environmental concerns. Read Mr. Cartagena’s recent interview with Daylight below.

Interview by Trent Davis Bailey
Photographs by Alejandro Cartagena (All images from the the project, Suburbia Mexicana.)

Daylight: Let’s begin by discussing Suburbia Mexicana. I’m particularly interested in how you have thematically segmented your four-year project into parts. Those being Fragmented Cities, Lost Rivers, The Other Distance, Urban Holes, and People of Suburbia. Were all of these parts aforethought or did you start with one idea and allow the others to evolve with time?

Alejandro Cartagena: The first images were just explorations of the landscape around Monterrey. I was very interested in looking at land as a cultural and aesthetic space. I wasn’t particularly sure that my work would be fixed on the actual housing developments or the landscape they were inserted in. I think a big change came when I received a grant to pursue the work and I had to concentrate on a specific aspect of the expanding Mexican suburbs. I did a bunch of research on what was happening around these housing developments and when I came across a map with locations of more than 100 of them, I decided to focus on that—a meticulous documentation of these new "Fragmented Cities." After one year of photographing I became interested in the historical background of representations of such constructions. It seemed appropriate to think this way as it would push me towards rethinking how I could propose a dialectic view of past patterns of suburbanization and the contemporary consequences spawned from them. That is mostly how the rest of the works came about—a search for causes and effects of suburbia. 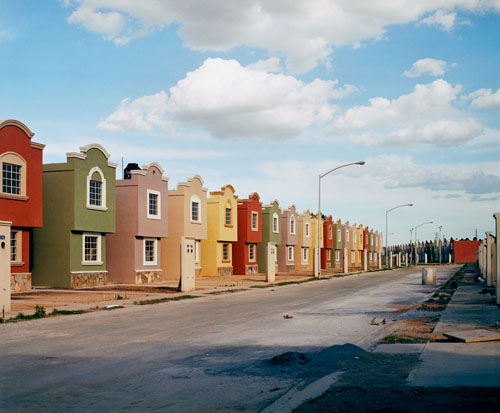 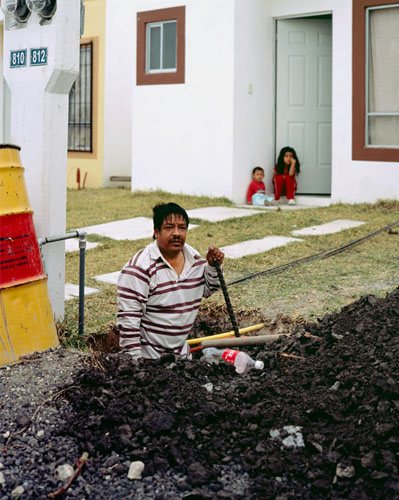 D: As you just noted, your photographs depict urbanization and development within Monterrey, Mexico, which reflects how rapid growth has impacted the region’s natural resources. While your focus is geographically narrow, there is a sense of a universal statement with these photographs. Is that your intention?

AC: Definitely. I was actually tempted to "expand" the work to all Mexico, still one country, but it was unnecessary. I am convinced that we (photographers) can now produce work locally and still think of it as a global issue. I also took into the work connotations of the history of landscape photography, aesthetically and conceptually, and created with this an explicit dialogue with broader issues about the way we have used land in western culture.

D: What do you feel is the role of a photographer examining the deficiencies of urban policy and expansion versus, say, a journalist writing about it? 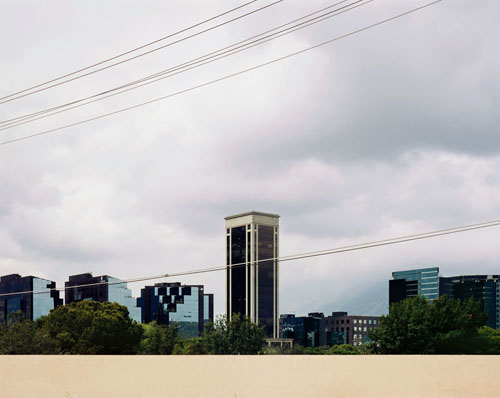 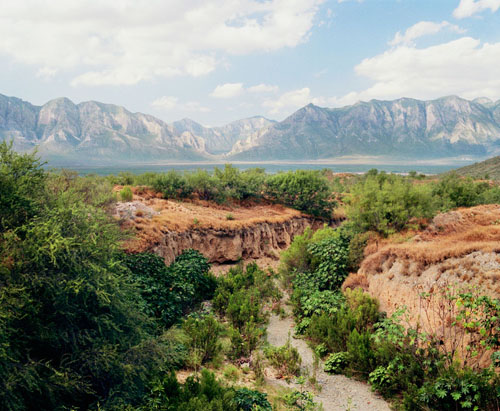 D: In using photography to comment upon municipal concerns, what do you hope others will take away by looking at your work?

AC: It is very hard to say I want a specific response from my viewers. I can tell you my work has many preoccupations, as you mention, that deal with the abuse of land, the construction of culture through space, corruption and its manifestations in the landscape, social injustice and division through private property, et cetera. I still feel art should be a balance of subjectivity and a political stance from the artist. 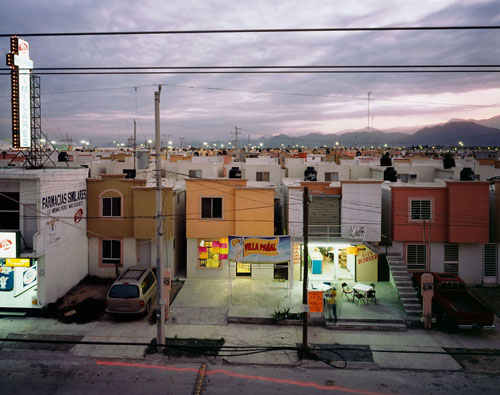 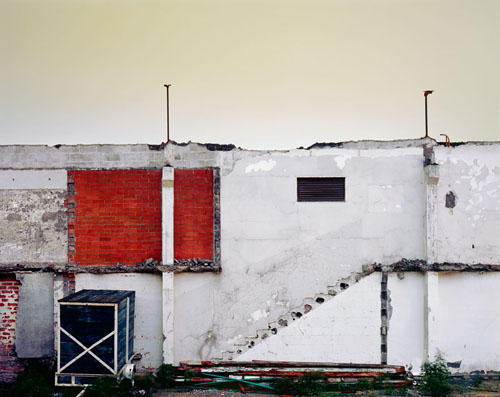 D: Speaking of politics, city planning is a topic that can often be fraught with pessimism, yet your photographs don’t feel overtly disapproving. While many of the images show telltale signs of faulty development, you still find beauty — and occasionally a strange, unnerving sense of order — within the urban environments in which you photograph. In many cases, it’s difficult to tell whether aesthetics or concept is more influential, or if they somehow influence each other. What do you feel is the balance between the two with your work?

AC: I want my images to portray an aesthetic sensibility that enables the work to be seen as a dynamic dialectical conflict. I can’t only judge this phenomenon as negative or positive—it actually sits very much on both sides depending on whom you talk to. My new work is actually a very personal approach to the "Mexican dream" of home-ownership, which is behind the Suburbia Mexicana work. There are always new ways on how to approach urban planning. I am still very much excited about how I can still grow my work to more complex readings of the city, the suburbs and their inhabitants. There is still much to be said about these issues. 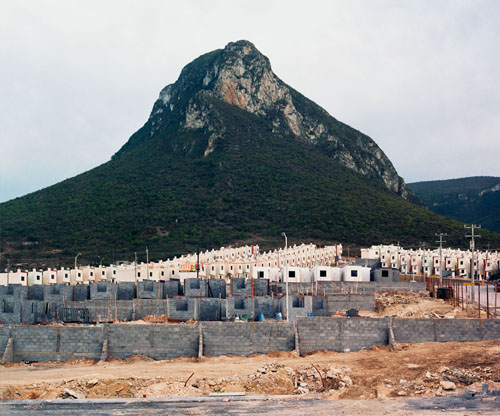 D: In relation to art history, many of your cityscapes recall the sprawling and mountainous paintings by the Hudson River School, as well as the prominent skies of paintings from the Dutch Golden Age. This is fitting considering both groups of painters were often depicting settlements, much like you do with your photographs in Suburbia Mexicana. What artists, writers, and thinkers have influenced and informed your work the most?

AC: A dialogue with the past is something that interests me very much, and so I am constantly trying to include things in my work that can broaden both the aesthetics of the image and the understanding of it. Lately I have been reading texts related to Visual studies—Brian Holmes, Ángel Rama, [and] Jose Luis Brea. I also look into texts by David Harvey and other social theorists.

I am also influenced by photo books. The newest ones on my desk are Robert Adams’ Denver, Trevor Paglen’s Invisible, John Gossage’s The Pond, Larry Towell’s The World from My Front Porch, Joachim Brohm’s Ohio, and a few others.

D: …and what’s next for Alejandro Cartagena?

AC: Continue the several projects I have been working on since 2009 and hopefully finish one of them by summer. Finish my Masters degree. Start a new project I’ve wanted to start and have fun with all of it.

For more information about Alejandro and his work, visit: http://alejandrocartegena.com