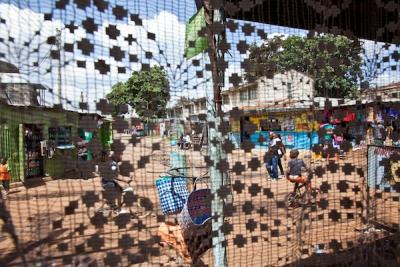 Daily Dispatches: Nairobi is an innovative exploration through photojournalism of a fast-evolving 21st-century African city, unfolding day by day in real time.

Writer Mike Pflanz and photographer Brendan Bannon will spend each day in April documenting stories from the city, creating a "compelling, informative and surprising portrait of the city, and the lives lived by those who call it home." Pflanz and Bannon have a combined 12 years of experience working in Nairobi, which they describe as "emblematic of the developing world's perilous rush to urbanize."

Each day, the images and reports will be sent to supporting Universities—Burchfield Penney Art Center at Buffalo State College, Quick Center for the Arts at St. Bonaventure University, and Bakersfield College—where they will be presented in an exhibition that is updated daily so that students will be able to experience photojournalism in real-time, and to spend more time reflecting on the images and stories. "The students and others passing by will be confronted by a version of Africa that they don't see everyday."

Daily Dispatches: Nairobi challenges the stereotypical imagery of Africa that is often portrayed by newspapers and traditional photojournalism. "I worked for the past five years for a variety of newspapers and magazines," writes Bannon, "each of which has its own expectations for images, its own sense of what a story from Africa should look like. If you are doing a story from a refugee camp, for example, editors expect an image of deep squalor….In too many minds Africa exists as the land of lions and safaris and mud huts, or a locus of suffering, HIV, poverty and chaos."

By freeing themselves from these editorial constraints, Pflanz and Bannon are able to focus on a wider variety of stories—so far they have covered the Kenya Derby; Shujaaz.fm — a group of hipsters, artists and designers that uses a comic book, radio show and other media to address the issues of Kenyan youth; and have profiled a variety of small businesses in the slums and the people who run them. Ultimately, by treating its subjects as equals, whose "motivations, worries and passions are not so removed" from the viewers seeing the blog, the project creates not only a richer and more nuanced depiction of Nairobi, but a more respectful one as well.

Keep up with the project on the Daily Dispatches: Nairobi blog and Facebook page, where viewers are encouraged to comment on images, ask questions and suggest stories that they would like to see.