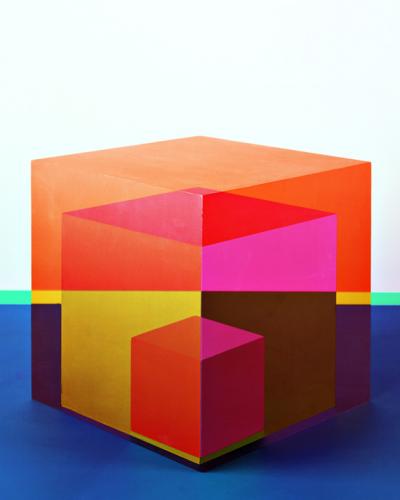 Below is a brief portrait of the artist by "20x200: A Jen Bekman Project" as well as a link to this year's other winners.

Jessica Eaton is an artist currently living in Toronto. Born in Regina, Saskatchewan in 1977, she spent her childhood engrossed in competitive gymnastics, followed by trouble-making.

After giving up on high school, she eventually moved to Vancouver, BC, where she first picked up a camera. It was love at first developer bath and she was taken on by Spotty Dog, a B professional lab, where she did custom printing in exchange for after-hours darkroom experimentation and lessons by the lab's technician, Mark. In 2000, she was accepted into the Emily Carr Institute of Art and Design. In 2002, she took a one-year break to work in post-production for film and television, after which she returned to Emily Carr to earn a BFA in photography in 2006.

Her work has been exhibited in galleries and artist-run centers across Canada, including the LES Gallery, Helen Pitt Gallery, Access Gallery, Blanket Gallery, Paul Petro Projects and Hunter and Cook HQ, as well as featured on numerous photography web logs. Her photography can also been seen in a number of art publications, including Pyramid Power, Patti, The Vancouver Review and the Hunter and Cook #4 Early Fall 2009.