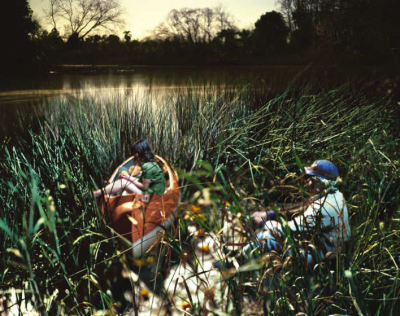 Nazraeli Press recently announced the release of La Creciente, a book featuring the work of Argentinian photographer Alejandro Chaskielberg. The monograph focuses on work Chaskielberg created in the remote Paraná River Delta region of Argentina, where he has lived since 2007. Departing from his previous experience as a photojournalist, Chaskielberg decided to reenact, rather than simply document, aspects of daily life in the Delta, which for most of its population consists of fishing, farming, and traveling the river. In an interview for Time's photography blog, Lightbox, Chaskielberg said that he met locals randomly, on piers and in general stores; and eventually found several people willing to participate in his elaborate, hours-long shoots, always executed in the middle of the night. Taking up to ten-minute-long exposures and using a combination of strobes, flashlights, lanterns, and the moon as his only light sources, Chaskielberg's resulting images place his subjects in beautifully lush, almost surreal dramatizations of typical life on the Delta. What emerges from his gracefully staged, yet informative images is a body of work more akin to Gustav Courbet's paintings of farmers and stone breakers - acclaimed as spawning the Realist movement. A selection of photographs from the same series of Chaskielberg's work is currently on view at Yossi Milo Gallery, until July 29. Written by: Juliana Halpert