Riot on the Dance Floor: The Story of City Gardens told at last 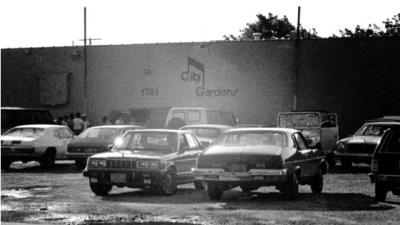 You have most likely heard of Hilly Kristal, of CBGB's fame, but have you ever heard of Randy Now? Mailman by day, ballsy punk rock music booker by night, and avid record collector at all hours. In the 80's and 90's, just down the Turnpike from NYC, on the way to Philly, sat a concrete bunker with a jaunty musical note logo that read "City Gardens." The place was a punk and hardcore mecca in Trenton, NJ, the only place around you could see bands like Nine Inch Nails and Die Warsaw and Black Flag. Jersey wasn't just for fans of the Boss. The band list is like a who's who; everyone played there, who knows why, since the club was in "one of the worst parts of the city," according to the current website of the film "Riot on the Dance Floor", a documentary in production by director Steve Tozzi, which includes vintage photos by photographer Ken Salerno. Also involved as co-producer is the one we knew as "Sicko," Steven DiLodovico, a club regular who wrote the book "No Slam Dancing, No Stage Diving, No Spikes: How City Gardens Defined an Era."

The book title comes from a sign in one fo the photographs: "NO SLAM DANCING, NO STAGE DIVING, NO SPIKES". There was, of course, the danger of all of the above. "I knew to stay all the way the F in the back. It was no place for girls in that mosh pit," says my friend, Laura, who stood just shy of 5 feet tall, even in her high-laced Doc Martens. "It was a City Gardens F-in mosh pit, not just any mosh pit!" She recently recounted a story to me about seeing a Suicidal Tendencies show there somewhere around '89-'91. She was up near the front at the bar on the side when a mosh pit broke out and began to move closer and closer, like a fast-moving hurricane. Unable to escape on her own, she was miraculously rescued by a long-haired Native American man, who whisked her away and took her to safety. They shared a Coca Cola, and made out in the car on the way back to the Philly suburbs.

Which brings me to my own, personal, big question mark. Where was I in all of this? Why did I never make that trip across the Delaware to see the Ramones or Ministry? The answer must have had something to do with the fact that I was lucky enough to own a car at age 16, 17. "The called it Shitty Gardens for a reason," Laura says. "You probably refused to drive. Everyone's car got broken into. Nobody ever wanted to drive. It was ghetto. You didn't hang out afterwards, go out to eat. You went from the club to your car and that's it."

More info about the project is at: http://www.citygardensfilm.com/

or at their Kickstarter page: http://www.kickstarter.com/projects/457419391/riot-on-the-dance-floor

There's a great trailer with an interview with former bartender, Jon Stewart. Yes, that Jon Stewart. You can even pledge some dough to help the movie go forward.