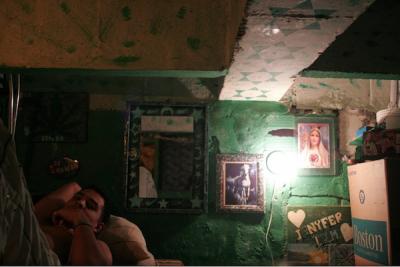 In September 2009 photojournalist Vance Jacobs was invited to Medellin, Colombia by the Centro Colombo Americano to teach a photography workshop to inmates in a maximum security prison in the city. He spent a week teaching photography to eight of the 4,200 inmates at the Bellavista Prison, culminating in an exhibition displayed at the prison and at the Centro Colombo Americano. Pete Brook of Prison Photography has called the project "an exercise in self-documentation overturning stereotypes and the ‘exotic fetish’."

"One of the things that gets the inmates' attention is responsibility, that there is a stake in what they do. In this case, their ability to work together as a team, and to pull this together in a very short amount of time would determine whether other similar projects were done not only at this prison but at other prisons in Colombia," says Jacobs. "Once they bought into the idea that there was a lot at stake, they really applied themselves."

See more photographs from the workshop here and here. Vance Jacobs talks about the project in a recent video.

Photo caption: Built in 1976, the prison was intended to hold 1,500 inmates but its population grew rapidly, which has led to inmates subdividing their cells into smaller and smaller unites. Many inmates will buy or rent attic-like spaces in other prisoners' cells, with no more than 3 feet of clearance between the boards that act as a floor and the ceiling. Photo by inmate.