An Interview Worth Reading 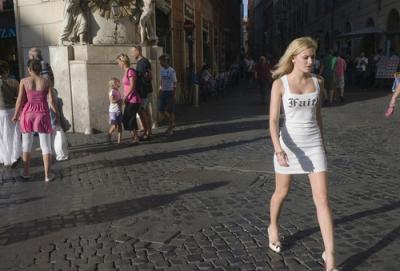 Appearing in the brand-new issue of Aperture Magazine (Fall 2011) is a tightly-edited interview between photographer-teachers John Pilson and Tod Papageorge on the subjects of photographic education, straight photography, picture-making, Brassai and Cartier-Bresson, among others. The text was culled from a 5+ hour conversation the two had with a limited number of students and colleagues present, on the occasion of the publication of Papageorge's Aperture book of essays, "Core Curriculum," which also happens to be at the beginning of this phased retirement after 32 years of teaching.

JP: When I was a student, the big arguments revolved around "the politics of representation"; who you were and what you could say. There was an implied criticism of the Szarkowski tradition, that there were unasked questions in terms of the nature of the “gaze” and privileged positions.

TP: Again, it gets back to that moment that I saw those two Cartier-Bressons. To me, the picture was utterly fictitious. Of course, I’d be a fool not to agree that a photograph represents something in the world at a certain moment, that it is indexical to some degree. In fact, let’s say a large part of its paradoxical strength is because of that. Because we are looking at the world and, at the same time, a representation of it. That combined with my profound belief in the idea of Art and the idea of great poetry, great music, great photography, led me to be completely unconfused about what I consider side issues. Who cares about images of identity or questions of representation? We’re making art here. Art is “The leaf so short, the craft so longe to learne”—“the life so short, the craft so long to learn.” The game is for mortal stakes, as Frost put it. It isn’t for what somebody is going to think in ten years, or an art historian is going to think tomorrow. That was always my attitude. I’m not saying that I always have been and always will be completely right, although I believed it and still do. That gave me, I think, a certain kind of strength (maybe even some people might call it arrogance) in relation to what I felt were these sort of temporal or momentary questions.

The piece also includes several new and unseen older photos from the last few decades, alongside well-known images from Papageorge's oeuvre. Also included in the issue are interesting experimental works by Lois Conner (Tod's student from his first couple years teaching) and also disturbing, raw images by Rimaldas Viksraitis of rural Lithuania. This issue's a keeper, not desinted for the recycling bin.