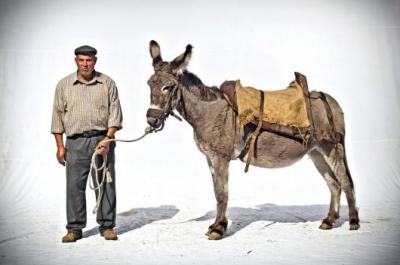 Faith in Donkeys is the latest photography and video project from Portuguese photographer João Pedro Marnoto; an exhibition of photographs from the project is now on view at the Hard Club in Porto, Portugal. Each photograph in the series is a portrait of a donkey or mule, with their owners, standing in front of a white backdrop that Marnoto installs on site. Although unidimensional in format, the photographs are a gentle distillation of an important part of rural life in northern Portugal. By utilizing the formal portrait backdrop, which brings fashion photography to mind, Marnoto seeks to elevate his subjects beyond mere nostalgia or sentimentality, hopefully convincing viewers that the exhibition is more than (excuse the pun) a one trick pony.

Rural life and culture in the face of increasing globalization and urban migration is a recurring theme in Marnoto's photography; he has described his work as a representation of "a human relationship with nature and faith vanishing and confronted by new social, economic and political realities." Marnoto, and his non-profit organization MediaUtopia, also conducts participatory photography workshops throughout the country, most notably Entre Nos/Between Us (2009), now a book and documentary film.

Faith in Donkeys will be on view through August 2011 at the Hard Club, Mercado Ferreira Borges in Porto, Portugal