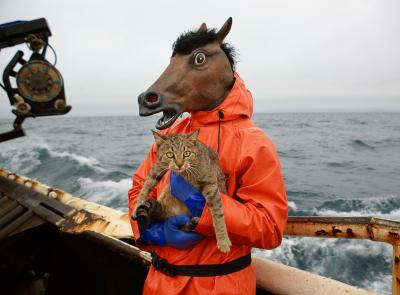 Photographer and Alaskan commercial fisherman Corey Arnold’s photographs deftly explore the commercial fishing industry in which he works.  His first book, Fish-Work, was released in May 2010 by Nazraeli Press.  It won the Photo District News Annual Best Book Award and sold out in four months.

I had a chance to chat with Corey the other day about his beginnings, his newest project, his most harrowing accident on the water, and his photos in the group show “Frontiers” opening this Thursday, September 8 at Bold Hype Gallery in New York City.

So, Corey, where are you from?

I grew up in Vista, California.

And you were into skateboarding growing up?

I was skateboarding, surfing, and snowboarding. But mostly skateboarding and into the punk rock scene in San Diego when I was in high school… Sort of like the typical suburban rebellious youth culture. 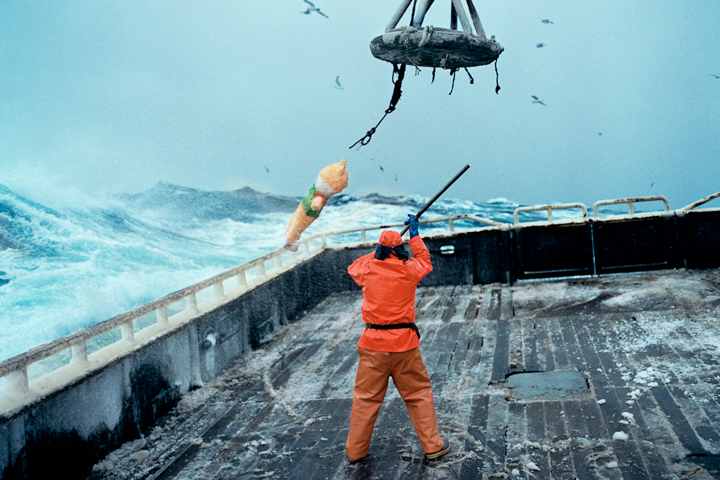 Is that when you got into photography?

My dad gave me a Pentax k1000 when I was fairly young.  He had the same camera - just a manual Pentax.  And he was taking a lot of photos and we went out on fishing trips. He had a twenty-three-foot little sea fishing boat, and we would fish for shark and yellowtail and tuna and he was always taking tons of photos of our journey and our catch.  So he kind of got me into fishing and photography, but then I took it way more seriously – for him they were just kinda hobbies – and I just ran with it.

And how did you get into commercial fishing?

So, my dad and I were so crazy into sports fishing that we started going to Alaska when I was thirteen or so. We’d go every summer to Alaska. That’s when I started to see this huge commercial fishing industry up there.  So, in the summer when I was nineteen after my first year of college, I found a job salmon fishing in Bristol Bay.  I did that for about five seasons in a row. After I graduated school in San Francisco, I was assisting photographers for a couple years. I wanted to do my own art photography projects, but was also willing to dip into the commercial realm.  But then I saw an opportunity - I could go back to Alaska.  So in 2002, I got a job on one of the crab boats and worked there for seven years. 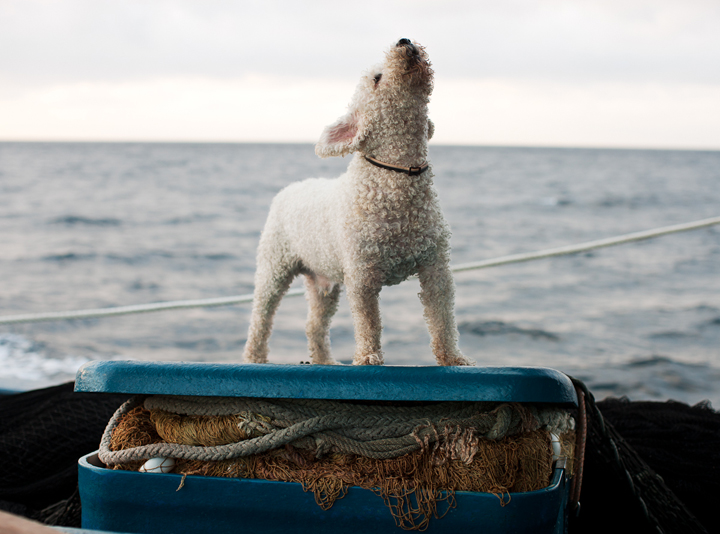 Did you begin shooting right when you started the job?

I brought my camera and knew I would be doing a photo project on it from the start.  I started documenting it straight away. 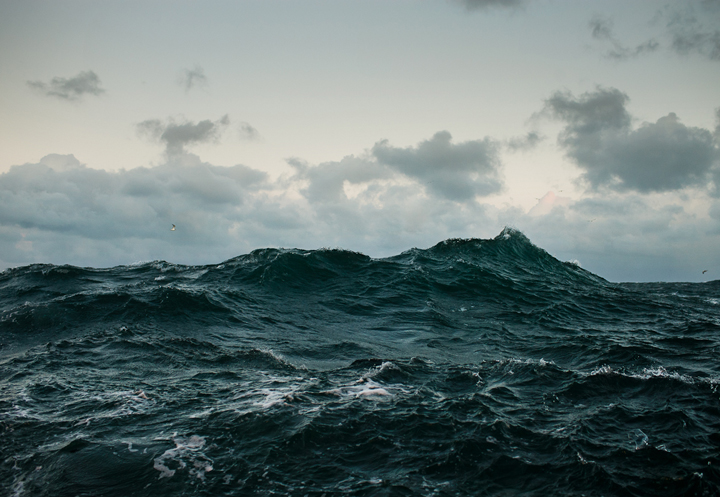 How do you protect your gear when you’re on the water?

I just use a Ziploc bag and duct tape over the lens hood.  More recently, I bought some underwater housing and AquaTech rain shields.  But it’s still limited. I don’t use the underwater housing above water very often - I’m still experimenting with it.  I’m not that precious with my equipment, yet it doesn’t get damaged very often. You have to know that in order to get these pictures you have to put your camera out there.  And it’s hard not to flinch when a wave is crashing over your camera, but I realized I was missing some of the best shots because I was ducking the camera right when the wave was hitting me. But sometimes those are the best ones.

Sometimes you have to let your camera get doused.  It’s important. 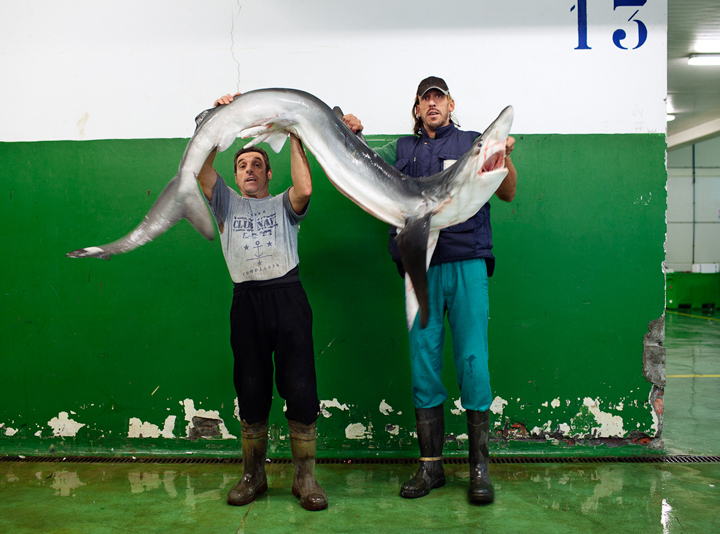 Commercial fishing is known to be one of the most dangerous jobs in America. What’s the scariest thing that’s happened to you on the water?

Often the craziest accidents happen on the calm days or the days when you least expect it. My worst injury ever was at the end of the season while we were on our way in – we were a fifteen-hour drive from shore - and I was cleaning greasy soot off the side of the boat with engine degreaser. And I accidentally dropped the bucket and it ejected a stream of engine degreaser straight into my open eye.  I was immediately blinded and I was staggering around, trying to get the hose to wash it out.  I had to crawl down and run, bumping into things trying to get to some sort of water source.  I went in the galley yelling, and no one knew what I was yelling about.  They figured it out and threw water in my eyes. And the engineer came up to me with his grubby, gritty calloused engine greased fingers and he ripped my eyes open with his meaty fingers and took his thumb and raked my eye. I was in the most excruciating pain. And what he raked out was the gellified skin of my eyeball. I had to lay there for a twelve hour trip, thinking that maybe I had blinded myself because I absolutely couldn’t see.  I had to get flown out. It turned out I didn’t burn it that deep, but I couldn’t see clearly for almost a month.

But then there’s also the crane – the crab pots breaking off the crane at full heights and the crab pots weigh 800 pounds. One time we were sorting crab and the crane was going overhead. The crane strap was pulled too tight and the bar that the strap was on snapped. An 800-pound crab pot fell about thirty feet straight down and annihilated the sorting table where we were leaning over with all our crab. It was just feet away from killing some of us. Those kinds of things happen commonly. It’s kind of amazing. Heavy equipment and wave action don’t mix.

It seems like even though the fishing work seems extremely daunting, you maintain a sense of humor in your photographic work.

It definitely gets serious. But at the same time it can be so mundane, time creeps super slow. You’re doing the same repetitive actions over and over again. It’s not as romantic as people think it is. Sometimes it’s grunt, grueling factory work in the coldest environment with the longest hours ever. So you gotta joke around to make it more interesting.  That’s definitely why I wanted to add some humor to the photos. 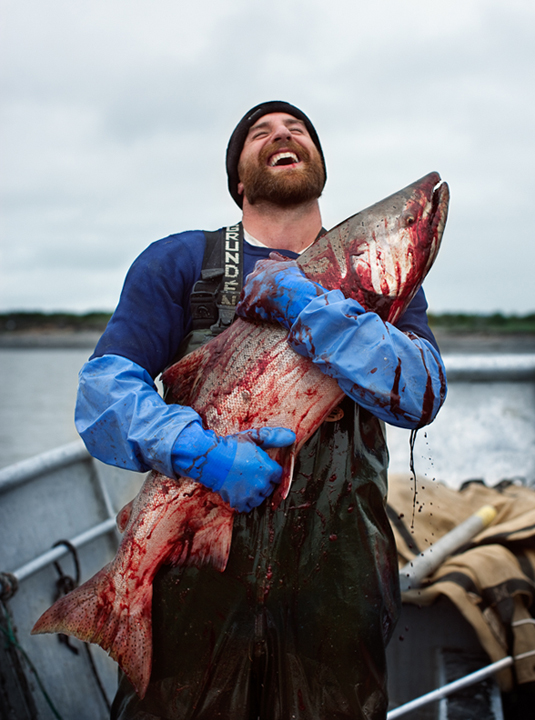 Do you think you’ll always stick with fishing?

Yeah, definitely.  The salmon world I’m building up right now I’ve been expanding for three years.   These are often family operations that don’t change hands very often, so I feel lucky to have gotten in.  It’s definitely something that I can see myself growing old doing. Someday if I have kids, hopefully I can bring them out there. It’s like summer work camp – exciting and educational. You’re hanging with the strangest people from all over the country and there’s grizzly bears and the worst mosquitos you’ve ever seen.  And it’s just super dramatic. It’s really fun and it’s full of highs and lows and triumphs and torture all at the same time.  It’s always interesting. You never know what’s going to happen.

What’s your next project?

My next project is the salmon project - I’m going to give it one more season. In about a year, I’ll have a show in Portland called “Graveyard Point” - about the strange salmon world I work in in Bristol Bay, Alaska.  I’m planning more books with Nazraeli, too. I‘m the type of person who’s never satisfied, so it takes me a long time to feel like a project is finished enough to stop and make a book. 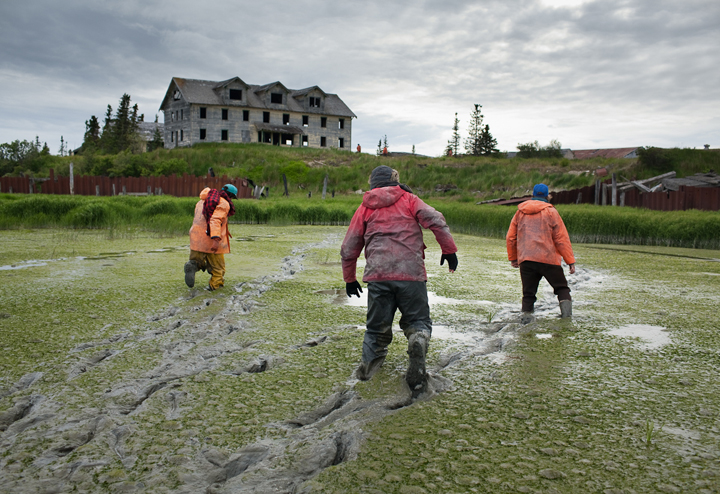 And the show in New York is coming up?

It’s this Thursday, September 8 at Bold Hype Gallery.  It’s a group show with Céline Clanet and Peter Beste. It’s a bit of a mix from the last year and a half – a few from my new salmon series which have never been seen before.  And a few which have been in one other show – so it’s pretty new stuff. I’m pretty excited to have five big photos on the wall. It’ll be fun.

One more question. Do you have any advice for younger photographers?

Yeah, I think that people should just go all out on a project. If you have an idea, a unique little niche, you have to go all out, spend your money and don’t think about it too much. I think a lot of people hesitate. Because so many people assume they don’t have enough money to disappear for a long period of time to photograph. But there’s a way to accomplish that with very little funds and it takes a tremendous amount of work.   You have to work nonstop, and nail one great project that can get your name out there. It opens up a world of opportunities once you have that one project that people notice. And once the doors open, there are limitless possibilities… 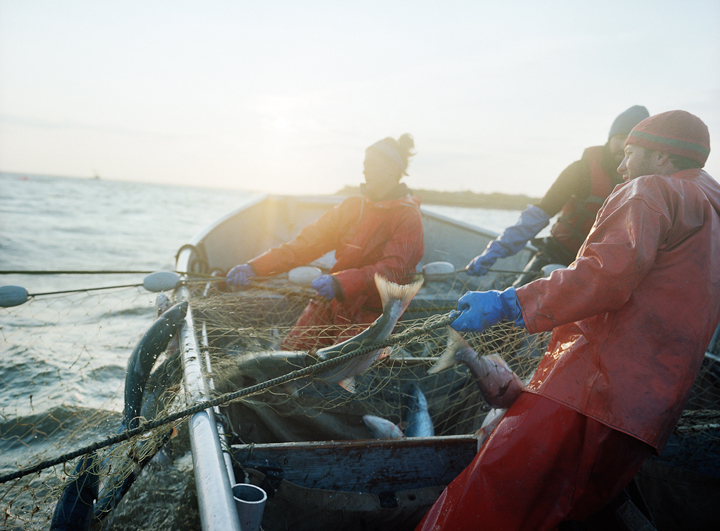 More of Corey's work can be seen at coreyfishes.com.

More info about the September 8th show at Bold Hype Gallery in New York can be found here: http://www.boldhype.net/