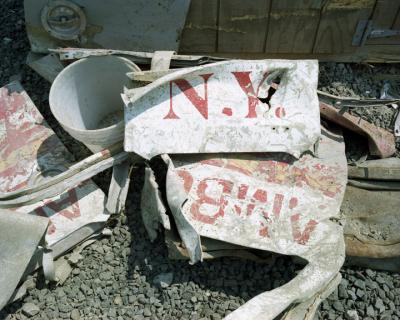 I remember everything about that day. This is unusual, because I usually have a terrible memory for bad things, negative childhood events. But I wasn't  a child ten years ago. I remember the phone call, the climing up onto our rooftop, the wondering why no one else was doing the same yet, instead staying safe inside their apartments. I remember the silence, and the sirens, the cargo shorts and crummy t-shirt I pulled on. Everyone talks about how beautiful and clear and sunny the day was; I remember that vividly, too. I remember distinctly the way the second tower fell, stright down, but tipped at a slight angle, and being shcoked, and unable to comprehend what I just saw. "A lot of people just died right there," Ben said. I remember looking at him, incredulously, and said, "Really?"

Another thing people talk about is that smell. The fire, the smoke. They say it is the same smell as an electrical fire. But different. I will never forget that. That smell is still in the ash I collected downtown and stowed in a Fuji NPH Pro-pack box; it was the only container I had in my bag. I remember entrusting my 120 film to the corner 1-hour-photo shop. I remember us taking the train into the city from Brooklyn later that day, the passengers sparse and silent. We wanted to get closer to what had happened, emotionally and physically, not further away. I can picture walking down Broadway to the border and running into an old friend. Jesus, he cut his long, long hair and is now a cop guarding the line. He looked dazed and distant, said his father had died the other day. We walked back up Broadway and got a slice of pizza at that crummy pizza joint on Broadway near NYU. I felt so guilty even doing that, knowing there were thousands who would never eat again. But we had to eat something. Then we passed Haagen Dazs - no, I recall feeling like that would not be the right thing at all to do. That night there were news reports of bomb threats at the Empire State Building, and I felt like the city was under seige. I remember the fear, and the confusion, and the not knowing. I looked out my window, and if you were in the exact right spot, you could see the Empire State peeking up through layers of rowhomes and buildings. I stared at it, as if I could keep it standing.

I remember, in the days and nights after, the dreams of many, many people, the nightmares, the imaginings of people's voices and faces, and the vision of many people walking together somewhere. When I would start to drift off, I would see strangers. Who were they? There was a man with a hot dog cart who I "saw", and conversations I thought I heard, but then they'd slip away. I don't believe in ghosts, but it felt like there were many people passing through, traveling somewhere.

Then in the days and weeks after, there were the homemade flyers all over town, with all the faces and names of the lost. The city became another place, with a new geography. Transformed. Moving through it, walking block by block, it all just seemed different now. And there was that weekend soon after, when we had to go to a pre-planned family weekend in Vermont. The last place we wanted to be was anywhere outside of our city. I felt a magnet pulling me back. The deal was sealed in the B, when the proprietor confidently, insensitively said to us,  "Well, I never liked those buildings anyway." I was in shock. Anger and shock. I really should publish the name of the inn, so no one ever stays there again, but I will resist.

My story is probably like those of millions of other New Yorkers who were the lucky ones. Lucky to be alive, unharmed, and to have mundane memories of that day, and to not have great personal loss. So many of us felt so guilty about that. Today, we remember those who were lost in our great cities. Following is a list of exhibtions, screenings and collections (online or otherwise) that you can visit to do so, starting with an incredible message of hope and human triumph:

-There is a screening of Man On Wire, an amazing, moving documentary film about tightrope-walker Philippe Petit’s 45-minute walk between the Two Towers in 1974 at the Museum of the Moving Image

-The National September 11th Museum and Memorial at the WTC site downtown, which is just opening completely to the public now: http://www.911memorial.org/

-Also at the NYTimes, a collection of the audio from the FAA's reactions to what wasunbelievabley unfolding: http://www.nytimes.com/interactive/2011/09/08/nyregion/911-tapes.html

-In the actual office building of the Times, in the lobby, is a show of the photographs which appeared in the newspaper and Sunday Magazine: http://www.nytgalleryofreflection.com/index.html#exhibit

-A show at the Yale Art Gallery in New Haven, CT, which focuses on artists' personal responses to the tragedy: http://www.yaledailynews.com/news/2011/sep/08/curating-911/