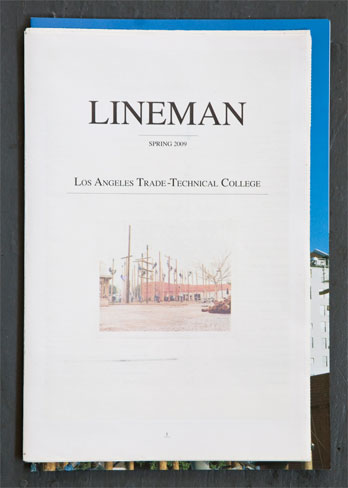 The feeling sunk in slowly, an ominous worry, a roused empathy that is only possible after you are made to know somebody.  I picked up a copy of Michael Parker’s project, Lineman, a month ago in a Los Angeles bookshop, some two years after the project was completed and published.  In the spring of 2009, Parker enrolled in a training course for electrical lineman at the Los Angeles Trade-Technical College.  Fifty students, ranging in age from eighteen to forty-six years old, met five days a week for sixteen weeks to learn the ins and outs of a new trade.  They learned how to wire electricity, climb poles, tie knots while wearing thick gloves, and they learned how to breathe under pressure. 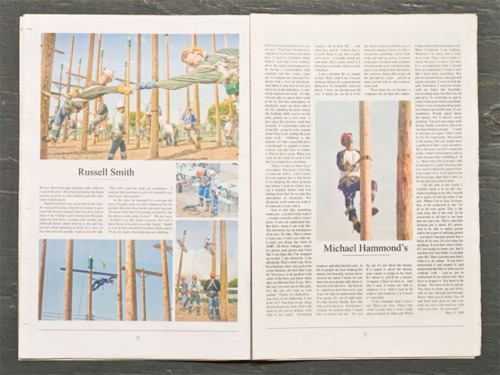 Parker’s publication, a sixty-page newspaper, chronicles their time in training through photographs and interviews.  Each student has a dedicated page depicting them in action, suspended, acrobatically, high on a pole, reaching, balancing, and leaning.  Parker paired these images with the stories of each man.  We learn where they came from (Deodonell Paras from the Philippines, Lementry Simmons from South Central LA, Matt Allen from Medford, Oregon), what they are good at (Aaron Alarcon can fly helicopters, Brian Gomez is a DJ, Robert Minero was a four letter varsity athlete), and we learn who is depending on them (Cody Patterson’s seventh month old daughter, Chris Sotelo’s many female friends, Brandon Dai’ Re seven-year-old brother Jamal, who thinks he’s “the coolest thing since pants with pockets”).  Parker graciously saw the best in each of his fellow classmates, and he did supreme justice in portraying the courage it must require to pick oneself up and begin a new profession.   Individually, they are heroic, and together, they are steadfast. 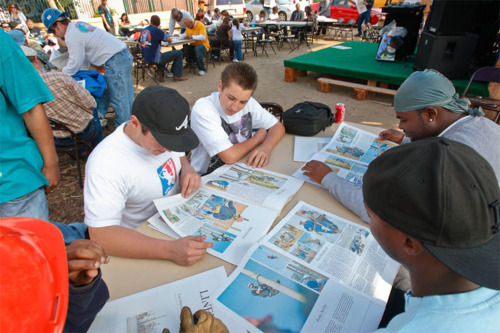 What stuns me most about Lineman is how faint and endangered their shared optimism feels today, just two years later.  My heart sank as I began to wonder about the fate of these fifty men; have they found work?  How did we so easily give up on the American Recovery and Reinvestment Act of 2009, and how did we abandon the legacy and lessons of the New Deal?  I was astonished by how closely Parker’s project mirrored the images of the Works Progress Administration (see images below).  They accomplished so much (the Lincoln Tunnel, the Triboro Bridge, the Chicago Subway system, they laid twenty thousand miles of water mains, built three hundred and twenty five firehouses and they extend the electrical grid across the United States).  This week, we saw President Obama out in the field with renewed vigor, stumping for the American Jobs Act.  Let us demand that our government put faith in itself and in its own people to rebuild our fractured country.  We can see clearly what has been accomplished in the past, what needs doing today, and here are the people who can do it.

For more information and works by Michael Parker: MichaelParker.org