Worth the trip: Evans in Old Lyme, CT 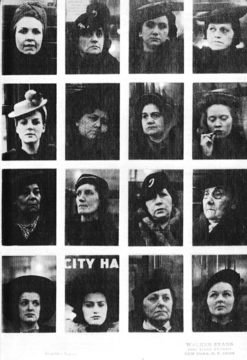 Fans of so-called Straight Photography, Modern Art and forward-thinking need to get in their cars, or on the train, and visit the Florence Griswold Museum in Old Lyme, Conn. Ironically, at this home of American Impressionism, is a wonderful show, a mini-retrospective of sorts, of the photography and collecting habits of Walker Evans. I say "ironically," because Evans railed against Pictorialism and artiness, and his pictures were detached, clean and crip, most unike a gauzy, fuzzy Impressionist's view. But Evans, like these painters before him, chose to make a home there in Old Lyme, an artist's colony in a quintissential New England small town, not far from the Long Island Sound, source of many of the treasures he collected on the beach in a neighboring town.

The work is vital, and is as relevant today as it was when it was made, from the 30's through the early 70's. The things Evans (and Frank) warned us about - our excesses, or wastefulness, our prejudices and prides - are still infecting our society today. Looking back at these pictures in 2011 (which actually, in a way, looked forward in their day) helps the viewer to understand where we might have gone wrong, and how we will continue to do so, if these vanities are left unchecked. The advertisiing, the junk cars, the workers, the rows of cars, the shiny tools, the migrant workers and their ramshackle homes, are presented here, most likely as you have never seen them before, in large inkjet prints made by the former estate's executor, John Hill. There are scale shifts that occur that change how a viewer perceives the work, and shadow details that are let loose, which help explain what Evans was seeing and responding to in the first place.

These mural-size prints may sound like heresy, but the original 1938 American Photographs show at Moma contained 16x20 inch enlargements, if not a few even a bit larger. Evans was interested in what the work could do at different sizes, and he didn't shy away from experimentation and new technology. In fact, when the Polaroid SX-70 camera was still in its test-market phase, he bought one right away. he ended up with three of them, with which he made 2500 pictures in 14 months towards the end of his life. A grid of these Polaroids is on view in this show, and seeing them like this helps chnage them, in my eyes, and gives them more power. In a symposium yesterday at the museum, several presenters showed a grid Evans had made in 1959 as a mock-up for an unpublished book. In it, he severely cropped the subway portraits that appeared in the book, Many Are Called, a few years later. There is a grid of 16 women's heads, all in hats, and you can't help but compare them, not unlike seeing a (later) Becher grid piece of many blast furnaces or water towers, so alike that they become so different. When you see the polaroid heads coming out of the green-gray darkness and the subway heads in close proximity (as in Moma's Katherine Alcasukas's presentation), a viewer cannot help but think of Andy Warhol's screen tests, or even, more recently, Philip Lorca diCorcia's Heads series, made anonymously on the street. Evans becomes not a mere documentarian, but a great Modern (dare I say Post-Modern?) artist. I wasn't convinced of the Polaroid portraits before, but now I see how they can be viewed differently.

City dwellers will have a chance to see some fo the Polaroids at Andrea Rosen this December. Stay tuned. http://www.andrearosengallery.com/future/

Right now, see the artist's work on the wall just a couple hours form NYC, through the end of January 2012, at the Florence Griswold Museum: http://www.flogris.org/exhibitions_11Evans.php