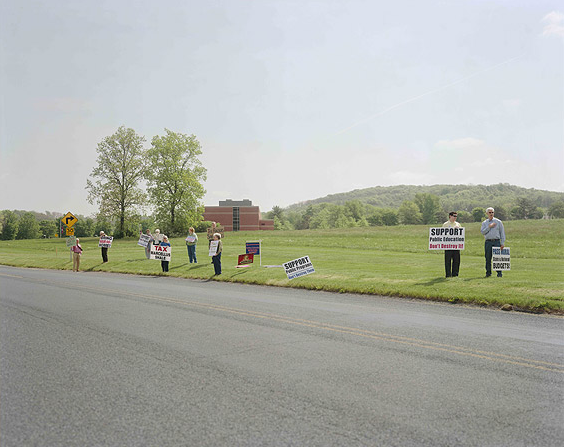 One of the topics 8x10 portrait photographer Judith Joy Ross is photographing continues to be protest. Rather than the anti-war protesters she photographed in her small, accessible booklet, "Protest The War", the subjects in part of her current show at Pace are environmental activists, who are speaking out, among other things, about the dangerous practice of fracking to drill for natural gas in her area. A previous post here listed the show, but a recent discussion with the artist highlighted just how deeply personal this issue is for her. The 65-year old photographer frequently sets out these days, view camera, Tom Tom and "Frack is Wack" button in tow to various Occupy camps and protests staged in Pennsyvania and in New Jersey. She photographs them in meetings, in lines, phonebanking. A photograph made at the end of a rally crossing train tracks and another made of sparsely-staged protestors with signs along a roadside both recall the also civic series, "RFK Funeral Train" by Paul Fusco. She follows closely activists involved in trying to stop the practice of fracking, a way to release natural gas from shale deposits in her area, and beyond. The drilling causes, among other things, polluted byproducts to contaminate local water supply, which was famously shown to ignite in citizens' kitchen and bathroom faucets in the 2010 documentary film, "Gas Land", by Josh Fox. If you haven't seen it, then you should. The very recent earthquakes in Ohio are being blamed on the practice, which should be a huge wake-up call to everyone. As if October snowstorms and January days at 61 degrees (Hello 2012!) are not enough to rouse us to the dangers of over-exploiting the earth, perhaps the ground rumbling below will knock us to our senses. Ross, however, needs no shaking up; she is already so dedicated to her cause that she is driven obsessively to be one voice speaking for many. Her activism lies in the photography of those people she believes in, so that we may see the pictures and be roused to action.

For another post that includes details of the local issues in Pennsylvania, see here: http://armenphotography.blogspot.com/2011/12/judith-joy-ross-recent-work...

And if you are in Cologne, be sure to see Ross's retrospective through February 5th: http://www.blossfeldt.info/wEnglish/photosammlung/index.php