In the Middle of the Night with MJ Sharp 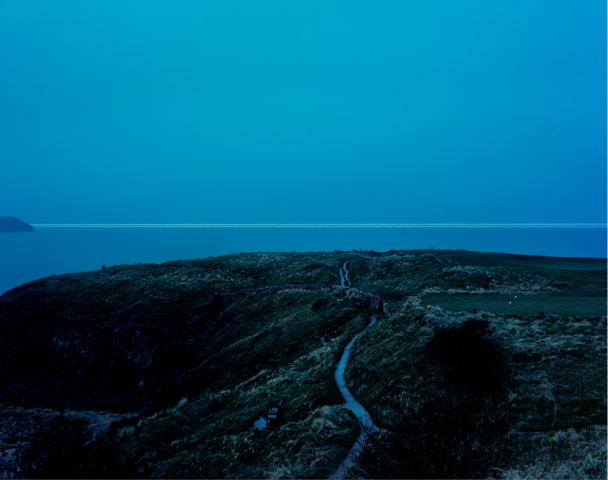 Talking with photographer MJ Sharp is like talking to an old friend. Such was the case on a recent afternoon in Durham, NC when MJ and I met at Craven Allen Gallery to talk about photography; the rigors of art practice, regionalism and a whole lot more. Smart and refreshingly affable, Sharp has powers that extend well beyond those that most Southerners possess; yet, she doesn’t wield them, she shares them with you. All this before you even look at her pictures. By the time you do take a look-even one that is considerably shorter than the time it takes for her to render an image-you are hooked. And rightfully so--------

Light Cache, Sharp’s current exhibition of photographs on view at Craven Allen Gallery in Durham, NC through January 28, 2012, is a collection of large format, long exposure renderings that depict domestic objects and scenes along with regional and international landscapes. Many of these scenes and landscapes have been taken at night. This is the part of Sharp’s practice that I have been fascinated with since we met as entering MFA’s at the University of North Carolina at Chapel Hill in 2005. In the announcement for her exhibition, she explains her nocturnal impulse: Though originally motivated to shoot at night because I wanted to be out in the world when it was at its most quiet, dark, and restful, I later found myself staying out all night because I loved the visual results. At night the elements of a scene have a completely different relationship with each other than they have in the daylight—a relationship much less about color and much more about reflectance. The flurry of daytime details falls away at night, leaving only the bare bones of a composition, and light-reflective objects seem to emit their own light.

Light, color and composition are key elements of both photography and painting. Sharp obviously understands this-hence the reason I term her photographs as renderings-and pushes the boundaries between the two disciplines. With her collection of well-worn cameras, she renders layers of light in a painterly fashion thereby creating images that demand a more slow-fire interaction. That said, it is no surprise that when asked about her inspirations, she quickly rebounded with Theresa Handy- a Midwest landscape painter that Sharp originally discovered while in New Mexico well over a decade ago. Sharp is also a collector of the painter’s work. Although Handy has since changed her style, Sharp remains focused on a period of the painter’s practice that combines minimal landscape compositions with glazing. Here, veils of color are painstakingly layered to produce depth and luminescence akin to Master Dutch and Italian painters of centuries past that inform Sharp’s approach to rendering photographic images.

A few hours into our conversation, Sharp had schooled me on how an image comes into being after she has spent time under the cover of darkness or available light to visualize her fascination with subjects like soaking beans, a water tower in Texas and the landscapes of Scotland-to name a few-which are part her most recent body of work. Balancing science and intuition, Sharp makes decisions about the who-what-when-where-why-and how of her pictures so that the source and resulting color of light articulates her initial impulse to document an object or scene. This six-step journalistic rationale-that works in concert with her creative impulse-has been shaped by years of working as a freelance photojournalist and staff photographer. Her journalistic work has been notably published in The New York Times, The New York Times Magazine and Columbia Journalism Review.

MJ Sharp often uses the word perverse to describe her slow process of rendering pictures. I might be inclined to agree. She takes analog to the next level, but when you look-really look-at her pictures you will thank her for doing so.Once Sharp makes an exposure, her film heads to Massachusetts where it is processed. Then, if she has access to a traditional wet color darkroom, Sharp processes the negative then scans it under a variety of conditions and creates a digital best-case-scenario of her negatives before sending enormous digital files to Minnesota or California where they are proofed and printed in a wet chemistry process.  Proofing happens via the mail. That’s right folks….mail. Although Sharp has in her possession a special monitor that is in sync with those of the labs she regularly works with, nothing is more exact than the actual print. So, a series of tests are mailed back and forth until Sharp decides the right combination of elements is reached. After Sharp finally receives the final print, there’s mounting to consider which provides additional stresses given the type of paper that she prefers. Frank Konhaus, Co-Curator of Light Cache writes in an introductory essay about Sharp that, MJ’s standard of image reproduction and proclivity towards perfectionism is at once awe inspiring and infuriating. Her studio floor is like a battlefield of fallen image warriors. She gets holiday fruit baskets from her photo lab and the Fed Ex Corporation.

But this type of production is expensive. How does a photographer with no commercial representation, no tenure-track academic appointment and who chooses to live in Durham, NC survive? Mainly, it takes a dogged determination, tactical smarts and a willingness to work from where you are. Early in our almost 5 hour conversation, Sharp explained that she has no interest in leaving the South. Here, she remains close to family, friends and a growing list of collectors. Why must artists in this region feel pressured to relocate? Sharp insists that there is a renaissance afoot in the surrounding area and she plans to help establish this shift by wholly participating in it. Her opening at Craven Allen Gallery (downstairs from the frame shop of the same name) was proof that there are people who want to collect art. Sharp feels it’s a matter of who you want to own the work and what feels right in the process of making that happen. At present, Sharp is thrilled to live within a community of people that wants to own a work like Banana Slab, 2010-one of the most abstract and engaging of her exhibition. (Seen below) This image and many others are being snatched up as indicated by the increasing numbers of red dots throughout the exhibition. 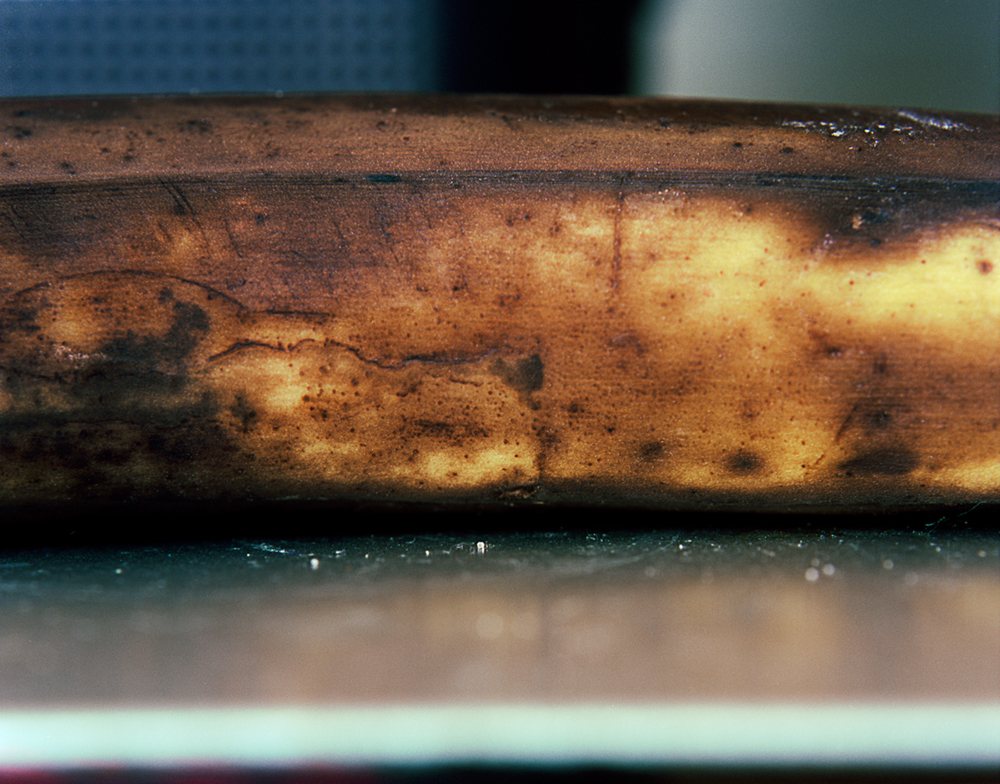 However, this is not to say that Sharp does not wrestle with the same longings and aspirations of most contemporary artists. Believe me-she does. Yet, she is devising a way to ‘live more humanely’ as an artist using the full weight of her East Tennessee girl smarts. Case in point, after a trip to Portugal with friend and intrepid travel buddy Nancy Townsend, Sharp was so moved by an eerie rock formation that she followed that impulse to the Scottish Highlands to document rock formations, landscapes and the sea. There, she caravanned across the Highlands, managed to find a photo lab that saved her life and learned the hard way that February is not the best month to visit this region. But how would she pay for such a trip? Yet again, taking inspiration from her location, Sharp (with help of collector and friend Frank Konhaus) funded her trip through a patronage model inspired by community-supported agriculture initiatives. Collectors and their friends were invited to invest in this effort by purchasing shares that could be exchanged for prints from her Scottish expedition or future works.

Towards the end of our talk, I had become attached to a trio of images (Callandish I, 2010 and Solitary Sheep, 2010-both seen below and Path to the Sea, 2010 seen at the top of the entry) that were taken during Sharp’s 10-day expedition in Scotland. Each reflects color (mostly blue hues) and light with an uncanny ability to suspend belief. Light glows and scatters across the surfaces of these scenes. Without Sharp’s photography, this glorious light would remain undetectable by the human eye. In the capable hands of MJ Sharp, I am left confounded in the best sense of the word and this is why I return to her images. By nightfall, Sharp and I had closed both the gallery AND Parker and Otis-a popular eatery in Durham, NC. Now, we were sitting on Parker and Otis’ patio looking out into the dark and talking with as much energy as we had done at the start of this marathon. As we each drove away, I was tempted to follow her just in case the urge to take a picture presented itself, but I resisted. I can hardly wait to see where nightfall takes her next! 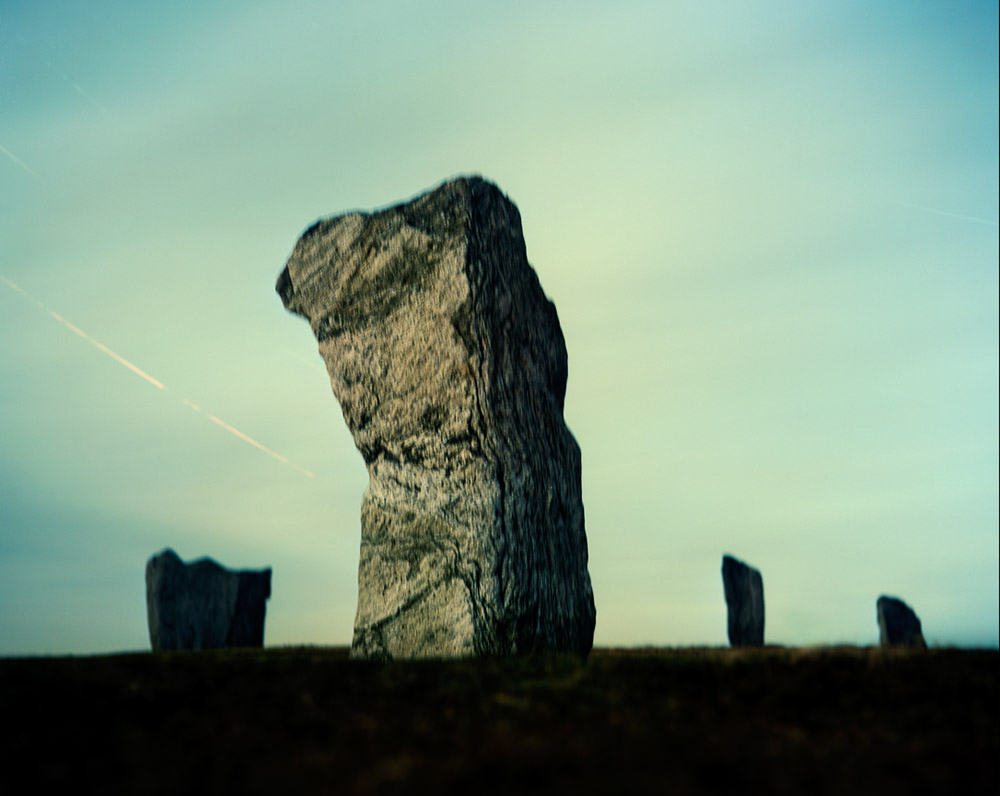 Callendish I, 2010, C-print on metallic paper 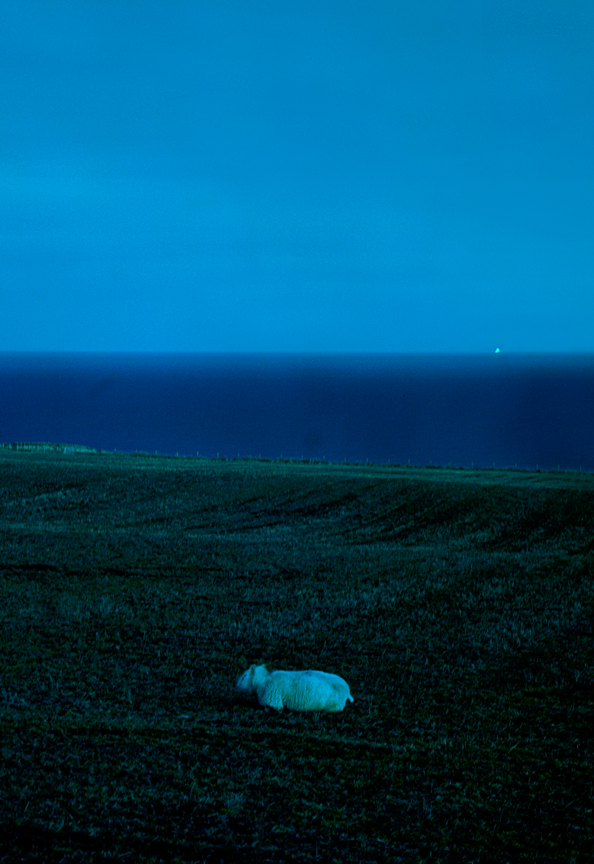 Light Cache,by MJ Sharp is on view through January 28 at Craven Allen Gallery located at 1106 ½ Broad Street, Durham, NC 27705. Gallery hours are Monday-Friday 10am-6pm and Sat 10am-4pm. Call the gallery at 919.286.4837 or visit cravenallengallery.com or mjsharp.com for more information. MJ Sharp will give a talk and demonstration at the gallery on Tuesday, January 17 from 5-7 pm. The demonstration will begin at 6pm.