In conversation with Richard Rothman 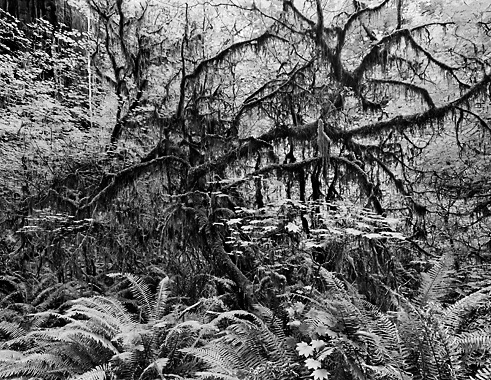 In 2004, New York photographer Richard Rothman traveled west with a 4 x 5 camera to explore the remaining fragments of ancient old-growth forests in Northern California. Unexpectedly, he developed an interest in the neighboring town of Crescent City. Rothman was affected by the town's disposable architecture, its emotional tenor, its political and religious culture, and the relationship that the townspeople had with the corralled forest to the east, and the Pacific Ocean to the west. The body of work, made over a five-year period, is gathered together in Rothman's first book, Redwood Saw, and combines photographs of the spectacularly ornate forest environment with the disposable landscape of the town and portraits of Cresecent City residents.

"For me," Rothman says, "the subject of Redwood Saw transceneded the specifics of the town of Crescent City. I saw it as a local story, fascinating in all its specificity, but also a global story. That is one of the essential tasks of photography: to recognize those salient facts which can become a vehicle for metaphor." Rothman's exploration of the themes of longing and unhappiness, reflected in the faces and bodies of the townspeople, suggest our underlying and universal human predicament. (Nazraeli Press).

Rothman will present a lecture this Wednesday, March 7th, at the International Center of Photography. Kate Levy took part in a conversation with Rothman to gear readers up for this lecture.

Kate Levy: You have discussed your desire to make work that accesses a deeper truth, one that is specific not only to the human condition but to that of the earth’s evolution. You say, “I wanted to stretch, and create something that was not just about our immediate culture, which is what any important art is going inevitably to be about, anyway. How can art avoid speaking from behind the veil of its epoch? But I also wanted to include some of my thoughts about the larger evolutionary picture: that life is spawned in the ocean and that forests are an important part of the earth’s next chapter.”

The photographs in Redwood Saw seem to bypass the specificity of a time and place; i.e., Crescent City, the redwood forest, and the Pacific Ocean. Many of the portraits and town shots could have been taken in any number of small towns across North America, though the redwood and ocean pictures are more site-specific. How much specificity of site do you wish to convey in this work? Are you finding similar themes in what you are working on now? When such universal issues come up in our work, are we bound to make similar photographs in different places, all indicative of the terrifying realities we face as members of a global society and this global ecosystem? Or do glimmers of individual place identities ever penetrate, as a reprieve from the drone of our current globalizing condition?

Richard Rothman: Yes, it’s true that most prewar, small towns in America have many similarities, but they’re all different, too, especially compared with the way things are put together now. And, of course, the geography that surrounds them is distinct as well.

I wanted to make a book about the shaky moment we find ourselves in in America. The country has faltered and is suffering from self-inflicted wounds. I thought that Crescent City was interesting in and of itself, but I also recognized that it was emblematic of larger issues that we face as a nation, and as a global community. The town has had a boom-and-bust extraction economy that has swung from mining to lumber and then to fishing, all of which have been depleted. So I saw Crescent City as a story in itself, but I also thought it could serve as a metaphor for important issues that transcend this particular town. That is one of photography’s great potentials, to simultaneously deal with specificity and metaphor in a mutually reinforcing way.

In addition to that, I wanted to try to include some of my thoughts about the larger evolutionary picture. There is something elemental about the narrative of Redwood Saw that I wanted to layer on top of, and in addition to, the American story. 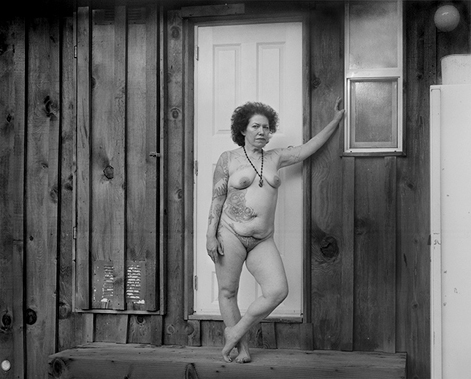 KL: You comment on the vulnerability of the people of Crescent City and their relationship to the economy and what’s left of the forest. In your interview, you also comment briefly on the Gulf oil spill. Have you considered turning your camera on this event, its implications, and it's aftermath?

RR: I think one of the conditions of modern life is that we all feel as though our lives are dictated by unknown forces beyond our control. It’s what Bill Moyers once described succinctly as “the bleak realities of powerlessness that shape the lives of ordinary people.”  It’s an interesting problem to try to photograph.

The interview in the book took place during the Deepwater Horizon oil spill, so the event was on my mind. I never considered the possibility of trying to photograph that, even though it’s undoubtedly a very important story. I knew there would be many photographers with a greater knowledge of, and feeling for, that area than I possessed. And of course there are issues of timing and access that are out of your control.

Many impulses need to come together for me to generate the kind of commitment necessary to devote years of my life to a photography project. A news event, as important as this one is, has not been enough so far to ignite that kind of commitment.  And, in any case, there’s something I prefer about a story that slowly bubbles up from your unconscious preoccupations as opposed to a newspaper, although I have great admiration and gratitude for those who do that well. It’s very important work.

KL: First, I’d like to add that conveying this powerlessness that shapes the lives of ordinary people lends itself to fine-art documentary photography. It’s also interesting to think about specificity as a means to empower the subject. When you focus on elements in a landscape to tell someone’s story,  you empower the human subject by giving voice to his or her particular situation. I agree that fine-art documentary work must relate to a larger human condition, inspired by the photographer’s subjective ideas about the place; otherwise, the images would likely not transcend reportage. What I find most interesting is when a photographer balances the idiosyncratic with the emblematic. You have managed to do this with the nudes you have included in the book.

Second, can you elaborate on some of the impulses that need to come together in order for you to generate commitment to a project?

RR: Well, there’s no formula, and it changes over time, as I change. I often don’t understand what all the elements at play are in the beginning, because they’re not all conscious. Martin Scorsese once said, “The hardest job is that you’re always trying to get the audience to care about your obsessions.” If I start by asking myself what it is that I care most about, what I’m most curious about, what I most want to look at, it usually takes me in the right direction, and, given enough time, things have a way of unfolding. It’s that process of discovery and intuition that makes the work rewarding. And, of course, you’re reacting to all kinds of things along the way. Themes that you didn’t begin the project with develop, and hopefully you can slowly begin to see ways of working them into a cohesive whole. I’ve learned to trust that. The project I’m working on in Colorado now is one I began before Redwood Saw, so I’ve been at it for many years, even though it was on the back burner for a while. I could see it was coming together in lot’s of interesting ways, but it wasn’t until my most recent trip out there in the spring that the structure of the book came to me, and I’d say I’d shot close to ninety percent of it by then. I never worried about that. I just knew it would come at a certain point.

When it’s complete, that’s when I can usually sit back and see more clearly what the many different impulses that motivated me were. That’s what I’m going to be talking about in my lecture at ICP on Wednesday, with regard to Redwood Saw.

Rothman's photographs may be viewed on his website at http://www.richardrothman.com/

To obtain more information or order a copy of the book, visit http://www.nazraeli.com/

Richard Rothman will present a lecture at the ICP school, as part of the education department’s weekly lecture series. 1114 Avenue of the Americas at 43rd street.