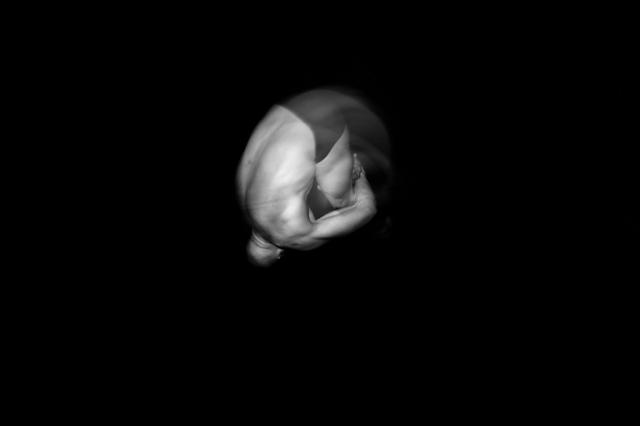 James Dodd is a photographer based in Sheffield, UK, and 2011 Photo Awards' Juror, Anthony Bannon's pick for the Works in Process Prize. Check out more of his work at http://jamesdodd.net/

Be sure to enter the 2012 Daylight Photo Awards!

Kate Levy: Thus far, your Olympic Dreams series depicts bodies contorted by a lack of gravity, abstracted by the mass of aquatic space. We see squeamish and excited figures hurling through skillfully employed negative space. This seems to invoke struggle, untamed success, uncertainty and fear. Can you offer any insight into the lives of your subjects as related to your compositions?

James Dodd: Through the work I was never trying to specifically depict a single individual or one's personal experiences. Whilst each image may show an individual, what it presents relates more to their overall progress as a competitor, emotions that may be more familiar to each and every member of the team at some point throughout their careers.
For example, the image where the girl is wrapped up in bubbles--whilst I'm aiming to depict a struggle, I'm not saying that this struggle represents her specific life, but it does represent a certain point in all of their lives and careers. They all go through the same processes. They all train hard and push their young bodies to the limits and do come up against the metaphoric wall. The outcomes for some differ from others. Some have gone on to experience great success at international competitions, whilst others developed injuries, which ultimately led to them leaving the program.

KL: Through your use of space, your images are successful in invoking feelings similar to that which the youth are feeling. Have you started working outside of the pool setting, more closely documenting the lives of your subjects? How has the series progressed since you were awarded a Juror's Pick in last year's Photo Awards?

JD: I briefly started working out of the pool with my subjects in the past. Back then I don't think it was the direction I wanted the project to head in. I felt I wanted to try and concentrate on somewhat of a mythical dream world, where I could convey divers' emotions through their bodies rather than showing the literal joy and despair they go through, as well as the repetition of their every day life.

As the Olympics has been approaching, I've been concentrating on other bodies of work, as I have gained a clear idea where I would like to take the project. I failed to gain Olympic accreditation, which at the time I was rather down about, but now I can see that being in that press pack, working poolside wouldn't have resulted in the story I wanted to tell. That particular area will be well documented, and perhaps oversaturated. We'll see way too many images of joy and despair of those who are lucky enough to place or unfortunate to fail.  So I thought hard about it and have decided to take the route of documenting the lives of those who fail to make that mark this time round. Maybe they’re the youth who I've photographed before who just aren't developed yet, or maybe they’re the older generations who have been replaced by their prodigies. Only time will tell. But I think it’s these untold stories which really interest me, these stories which unfold away from the TV cameras and millions of viewers at home.

KL: What is your connection to your subjects? How did you meet them? How closely do you know them?

JD: Whilst I was in college, I was searching for long-term projects to pursue; I felt I needed a contrast to the press type assignments I was being dealt through the course. As it came around to covering a sports assignment I decided to head to the local pool (which happens to be one of only a few international sized ones in the country, Sheffield’s Ponds Forge). A few other course members came with me the first time; at the time we were bunching together to make it easier to arrange shoots, one person would sort out one venue, another a different one and so on.  I enjoyed it there, and continued my visits as I started to engage with the coaches and find out more about their program. It wasn't a story I set out to tell, there was no information about what they were doing out there in the real world as far as I knew, so being there and talking to them is what shaped the project.  Over time I'd get to know a few of the kids fairly well, they'd visit exhibitions of the work, some would buy my book and one would come and visit me with her parents when she was injured.

KL: You have a few bodies of work involving swimming. Why swim teams?

JD: Swimming is just something I've always been drawn to, from being a toddler, when my Dad and my Uncle would take me swimming almost daily at Sheaf baths, which would later become Ponds Forge. This pool turned out to be the very same one I'd be photographing in 20 something years later. Also, being in university and having a cheap gym membership enabled me to go as frequently as I wanted without it breaking the bank!  I suppose photographing in the environment was a natural for me or at least there was always something very familiar about it. Being in Sheffield made everything much easier. We have so many international events right here on my doorstep it was almost rude not to get involved and photograph something I actually cared about and had a genuine intrigue for.

KL: Can you describe the process of making the underwater portraits?

JD: Creating the underwater images came via one of two methods. The first was a no brainer for me. Underneath the stands and through a dimly lit corridor and down some stairs with a broken lock on a door, was the vent shaft for the pool. Down here wind swings through from the heaters of the pool and sounds echo immensely. At both sides of the pool lies a pair of viewing portholes that the teams occasionally use to observe the divers' entries. I had no idea about the existence of this vent shaft, but one of the coaches suggested it to me. As quick as one of the kids was jumping in, I was jetting off to the security desk to beg for an access key!  It's dark, wet and dingy, the glass is thick, knocks a couple of stops of light off the lens and distorts things massively at times. It was by no means ideal, but it was convenient.  The second method included a borrowed or a rented camera housing. There was no way I could ever afford one of my own. As I previously mentioned, I was still a student whilst I created much of the first part of the body of work, so I was more concerned with how I'd pay my fees than how I'd buy a £3,000 piece of plastic to protect my kit! I asked around on a few specialist forums and someone offered me their kit for the day. I had no idea what I was getting in for. I was a fairly strong swimmer; whilst at University I was swimming a mile almost daily. But this wasn't swimming. It was diving under the water and holding my breath, trying to compose for an entry I was never sure the location of and then taking the photograph.
It was dark above the water, so as these kids dropped 2-3 meters below, it'd only get darker. I'd hold the camera in front of me, set to 5600 ISO, 1/100th of a second and around f/5.6, knowing full well that the diver would enter the water anywhere in the radius of a 6-meter circle. I'd come to know my 28mm lens quite well by this point, it was basically the only lens I owned, so not having to look through a viewfinder (which would have been near impossible for me anyway) was a godsend.  They'd fire through the water, it would light up as they dragged air down with them, creating bubbles which would twinkle in the little light there was at poolside, and I'd take 3-4 shots.  To say there was an element of luck involved would be an understatement. I didn't just come away with the images I wanted straight away, I had to learn how and where they would enter the pool, and what they'd do once they were in the depth of the pool.  The image of the girl almost looking like a crucifix, floating in the dark pool, was ultimately a conceived image. I didn't ask the girl to pose, but I just knew what she was likely to do. This was a result of me monitoring what she’d do. She was diving from the 10-meter board and she wasn't all that experienced with it, as she was quite young. She'd enter at quite a bit of force and to stop her hitting the floor, was told that once she'd hit the water she should put her arms out to slow her movements down. And that’s it, I’d observe it once or twice and then wait for the moment to come around again.

KL: Tell us about the bodies of work you have been developing since you received your Photo Award last year.

JD: I've recently been concentrating on a couple of other bodies of work, which are quite a venture away from my Olympic Dreams piece. I'm heading away from the side of the pool and away from sports in general.  I am focusing on subjects I’m extremely interested in. For example, car boot sales have been something I’ve been involved in since being a young child, both as a buyer and a seller. They’ve occupied many of my Sunday mornings. “Sunday Morning Sales” marks the first time I’ve concentrated on photographing them. It’s really something to witness, each seller pulls up to their pitch with their car rammed full of remnants of their lives: the books they’ve read, the gift’s they never wanted to receive, the clothes they feel no longer defines them, and the hobbies and collections they no longer desire to pursue. Each stall is almost portrait of the seller, a piece of themselves spread out right there on decorating tables and on the floor for all to see and buy. I’m presently working on grant proposals for the body, as I intend to continue my documentation and develop a touring exhibition from the series which will see me mount the prints in frames purchased from car boot sales, and exhibit them at the very car boot sales they were taken at. The Walkers project is almost an offshoot to this. After visiting the car boot sales out in the middle of the peak district, we’d occasionally head out walking on the hills and through the villages. At first it wasn’t exactly something I cared for, but after time it grew on me and I slowly became more and more engrossed in the idea of walking as an exercise and almost a way of life. The community and its pleasant greetings, the fresh air and the views are such a massive contrast to life in the city and a lovely escape. And it does contrast to the Sheffield work, where I’m trying to use photography as a tool to explore the changing face of the city, it’s identity and industry. In January 2011, I started photographing ever piece of food I've consumed in order to uncover any potential dietary issues I may have been suffering. This process resulted in my feasted project, on which I’ve recently released a self-published zine.