The Alphabet of Light, #1, by Kirsten Rian 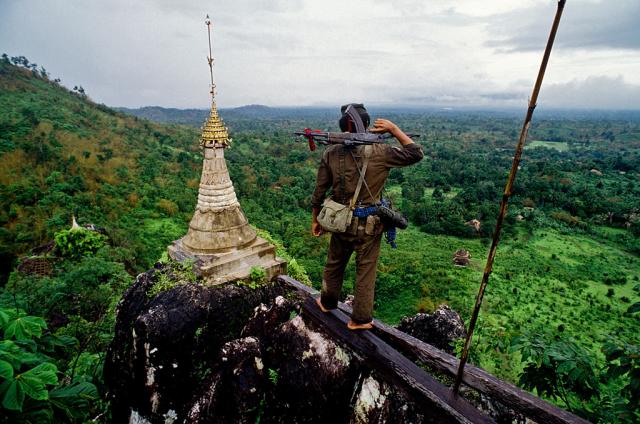 The Alphabet of Light

Until today, I knew just about nothing about bamboo. I am in a neighborhood library branch talking with a refugee from Burma. Salai worked for the Burmese government in agricultural development, and then for 15 years with the United Nations program on community resource management of remote villages. He tells me certain bamboo species only flower every 50 years. The seed’s fruit, the size of an adult hand, are encased in rich jade-green skin, the flowers drape. After flowering, bamboo die.

In his position with the UN, Salai would walk the borders in the far corners of Burma, identifying resources for townships, assessing what types of crops could thrive and rotate, surveying for water, and then submitting project proposals to the UN. He describes installing gravity flow water supply systems. He scratches out the math for me of five pigs per village times 10 years. We discuss terraced hill growing. Then he tells me about the rats.

When the bamboo blossom, rats descend from every direction--in particular, to the northwestern Chin state where Melocanna baccifera (the species that blooms every 50 years) are plentiful. When the rats have finished off all the bamboo fruits, they wipe out crops, invade homes and barns and devour all the stored supplies of rice, maize, and other grains. They gnaw through wood floors, walls, storage containers. And people starve. Thousands. In the late 1950s, an estimated 15,000 died. The recent 2008 event estimated 100,000 were at risk. It was at this time that Salai prepared his report and submitted his request for aid to the UN.

He tells me the Burmese government responded by stating that the official policy was: there is no starvation in Burma. News agencies reported on, and photographed the Burmese ‘maudam,’ as it’s called, including the BBC, the Guardian, and even Nova. But Salai was detained for suggesting such a thing, he fled, and applied for asylum, and here we are today in an outer southeast Portland library. Three of his sons await in a Malaysian refugee camp where they’ve been for five years. Salai helps build community gardens for other refugees in Portland. He’s just obtained another 40 plots for families and is working with the farmer’s markets to sell the produce. He tells me he misses roselle, a vegetable with leaves that are sauteed with garlic, prawns and chili.

Perspective. The angle at which the truth is caught. How it’s delivered. As Salai relays this story to me, I think about evidence and interpretation, I think about photography and its porousness--seemingly literal in its capturing of moments, but as we all know, not necessarily. A good photograph can tell the truth, or hide it. I think about what we believe, how we choose to see and why. What’s revealed through words or photographs are remnants of noticings. Our eyes catch and hinge on moments we come to believe in, so much so that we hit the shutter or jot down a note, or heck, a UN report; but those origins, when shared, become infused with another’s interpretations and agenda, all out of our control. I have worked in photography for two decades for one reason: because photos verify. On different levels and in different ways, based on context and execution, but an image sheds light and expands the story in its revealing or its unravelling. And I don’t think the genre dictates this, whether straight-up documentary, or a fine art photo exploring some abstract concept like memory, photography holds the potential to pause thought, or change minds, and that’s some kind of evidence I’ve got to keep believing in.