The Alphabet of Light, #4, by Kirsten Rian (John Chervinsky) 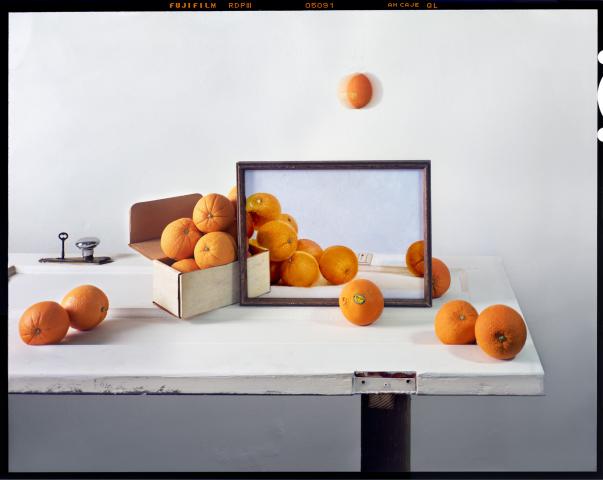 Working in applied physics research labs, my friend John figures out how and why things fall. Well, obviously much more than that--he tells me about running a tandem particle accelerator, about modifying a scanning electron microscope, about working with ice lithography--but as a physicist and wise friend he’s also helped me figure out (accept) why life (tumors, unexpected deaths) sometimes dips and falls. It gets back up again, somehow, always looks a little different when it does. What’s the science of that, I wonder.

John’s a photographer, as well, and his newest creative project is a collaboration with people who don’t realize they’re collaborating. And now, riffing on this idea in my mind while I walk the dog, when passing people on the sidewalk, the language of our nod hello or our not-breaking-stride comment on the weather could be an exchange of sociological call and response, instantly linking us to the page turns of a day, the after-effects we’ll never know, a study in the invisible unfoldings of pleasantries.

Parts of a whole. Almost exactly halfway around the circumference of the world in the Fujian province of China, artists reproduce paintings in a factory. They work off photographs, postcards, or even images in an art history textbook, mostly for foreign markets. John’s “Studio Physics--A Photographic Exploration into the Nature of Time, Light, Space and Gravity,” goes like this:

He tells me, “I am interested in making a connection between visual perspective and they way we form our own personal perspectives...So it's not merely a trick of the eye that I'm interesting in expressing -  but how we see and think.”

In a recent interview, John said, “...the painting itself is a mere facsimile, of the slice of time, of my very real tabletop setup in my studio. This may seem to be an inconsequential point, but more and more as we inhabit our own virtual worlds, we may need to reconsider what is real and what is not.”

That aged misconception that photography is a medium of accuracy in a real-time and real-place sense, or expressive of a single and absolute moment in time plays itself out in John’s project. Stretching the image capture time over a few weeks gives the photo itself a voice in the conversation on compression and expansion of time, of change, of impact and influence of others. When a project evokes those sorts of parallels it drifts past the corners of the frame. In his artist statement John talks about perspective, about “seeing and expressing subtle changes over time that we might otherwise take for granted.”

Take nothing for granted, is what I learn seemingly every day of adult life as it deploys missile after missile of transcending joy and collisions of loss. In A Year from Monday John Cage writes, “Sometimes I see it and then paint it. Other times I paint it and then see it. Both are impure situations, and I prefer neither.” I prefer both, actually, and both intersect in John’s project. Looping in and out and around each other, like time, luck, regret, perspective, recognition...all whorling about like they kind of do anyway. Always.